Wilf found a place for us to visit that would be a day trip out of Tokyo. It wasn’t in any guide books, but he found some descriptions online. So off we set.

We walked to the nearest station and took the JR Yamanote line, which is the circle line that runs around the city. After five stops we transferred to another train line to head south. We spent an hour on the train, passing through Yokohama. We arrived at the town of Kurihama, a few stops before the end of the line. We picked up some boxes of sushi, and then realized that we had forgot to bring Gravol with us. That led to a drugstore. I asked the pharmacist if she spoke English. When she said no I got my phone out to get to work. In the mean time she asked over her shoulder if any of her colleagues spoke English. You know, in case they had magically acquired the ability recently. One of the gals back there practically crawled under the counter to not have to deal with us! Anyhow, the magic wifi device and Google delivered the word for seasickness (in case you need to know it is norimonoyoi). Mr Google delivered the results in kanji and she knew right away what we needed. If we had been there all day we wouldn’t have found this: 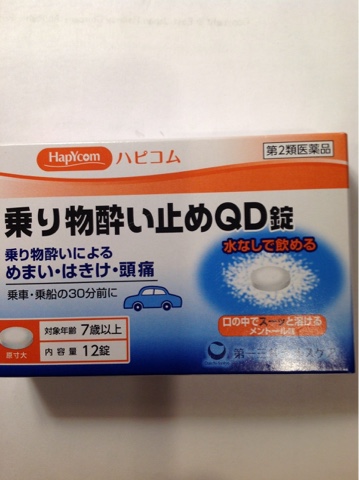 Suitably prepared we took a short taxi ride to the ferry port. While waiting for the 12:10 ferry we ate our sushi and soon enough it was time for about a dozen walk on passengers and a few cars to board a big ferry and roll our way across to the Boso peninsula.
This is when the best laid plans thing started to unravel. The next step was supposed to be a short walk to a cable car. Turns out that is was super windy and the cable car was closed. And we’re a pretty long way off the tourist track and there’s not many people who speak English around. We find out that there is no bus, but we get a map in the English that indicates that there is a path. It also shows a tourist information centre not too far away. We walk there, only to discover it is a pizza restaurant. It wasn’t clear to us if it was a pizza restaurant and tourist info centre, but the gal there helped us out by calling us a cab. And finally we were there.
But Sharon – what was worth all this effort? 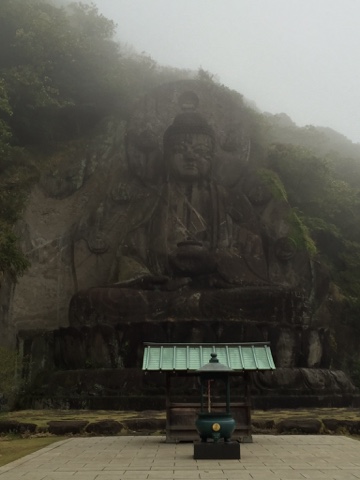 Carved into the side of the mountain is a Buddha. It is 31 metres tall. As you can see the fog was rolling down the mountain at a good clip – it is about  2:00 in the afternoon at this point. 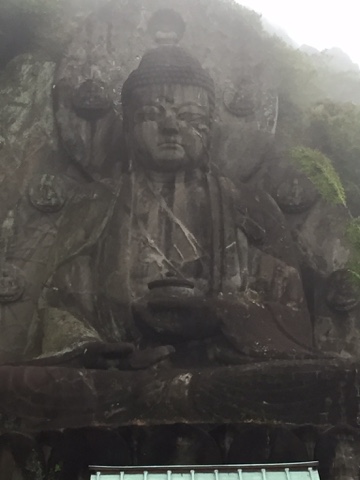 Of course there is a tour group up there. The guide, in full uniform of skirt, blouse, tie, hose and heeled shoes was waiting by the Buddha in a shelter. Some of her charges were hanging around and they were very curious about us, so we had a lot of conversation that was a merry mix of Japanese and English.
Time to see the rest. Turns out the rest involved climbing a mountain. On the one hand – we climbed up a freaking mountain. On the other hand almost the entire way was on beautiful granite staircases with sturdy stainless steel railings. So there was that. The fog continued to roll in and the atmosphere got more and more spooky. As soon as we started up we met some more of tour group one in their matching green jackets. One guy looks at Wilf and says ‘hey how old are you?’ Wilf told him and the guys says ‘Ha! I’m 83!’  So they shook hands and there was much laughing and we went our separate ways.
All over this side of the mountains are statues of arhats. Arhats are beings who have advanced along the path of enlightenment but have not quite achieved buddhahood. There are some 1500 of these statues tucked into niches and caves. Each one is different and individual. 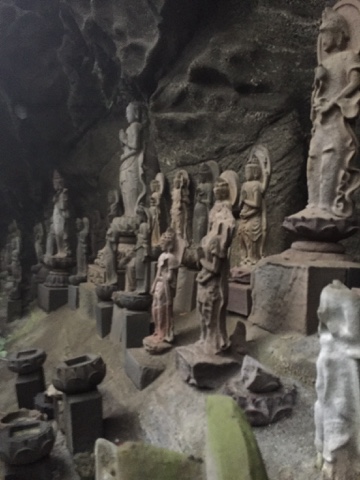 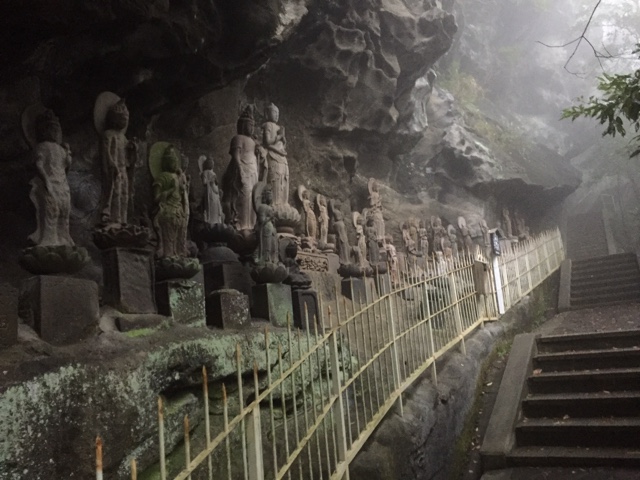 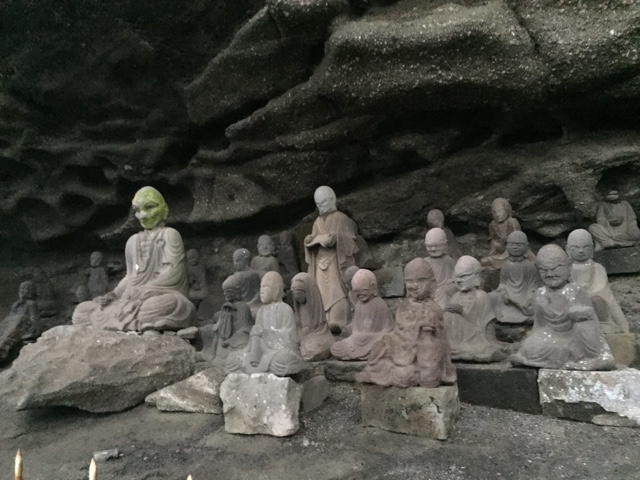 We climbed up a lot. Down a lot. Through tunnels and arches. 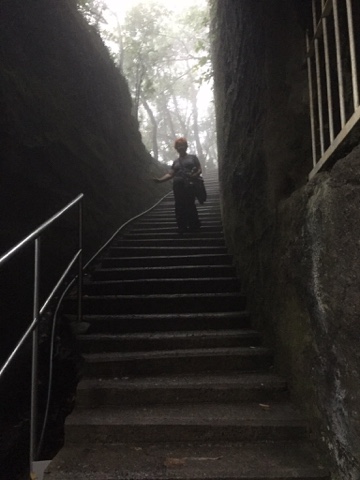 Sometimes I would begin to think – oh, this isn’t going to end well. And then we meet someone coming from the other direction and we’d cheer each other on. Fortunately we had a good map, and just as we were getting to the last series of stairs that would bring us to the top I looked up and there was a guy standing there. In a dark suit. White shirt. Dark tie. Clipboard. WTF? Turns out he was the leader of yet another group. A group of Buddhist priests. I don’t know who was more surprised – me to see them, or them to find this shiny, sweaty redhead coming up the stairs (did I mention that it was about 20 degrees and foggy. Like hiking in a sauna). Of course there had to be formal bows and greetings as passed one by one, along with the where are you from questions. Wilf caught a picture as the end of their group passed into the mist. Our original plan had been to take a path down the front of the mountain back to town. (Seemed like a good idea before we went up!)

As I heaved myself up the last few stairs I could hear Wilf saying to someone, ‘You have room for two?’ There was a group of three that we had met up with on the way and were trailing behind and they were offering us a ride. And sure enough, when we rounded the (inevitable) vending machines at the top there was a parking lot with a beautiful big SUV. The man, his wife and their friend were day tripping. They spoke almost no English, but we had a laugh filled ride back down the mountain. They delivered us back to the ferry port and went on their way.   By the time we got there is was raining hard. I can’t say how grateful we are for their kindness in offering us a ride.
We still had a ferry ride and an hour and a half on two trains. But we did it. And yes, it was worth it. The mountains and the sculptures – it was all amazing.