90 minutes from Osaka, in a valley high in the mountains is a special place. We knew we were in for something interesting when we arrived at our train. The train has been specially painted up to honour the 1200th anniversary of the temple complex at Koyasan. Our limited express train zoomed along to Hashimoto, then began the long climb up. We could feel the effort of the Diesel engines as they hauled us up up up. At the end of the line we boarded a funicular train that hauled us up even further, where we were met by a bus that took us to the town proper. By the end of the journey we were 800 metres above sea level.
So what is worth all this effort? Way way back a Japanese Buddhist went to China to study, and upon his return he wanted a place to study, to meditate, to educate. There are many tales of how he wound up here, in this mountain valley that is surrounded by eight peaks that form the shape of a lotus. Now people can arrive as we did, or drive on up.  But for most of its history this has been the back of the back of beyond. In fact for many years women were not even allowed on the mountain. In 2004 the complex was named to UNESCO’s world heritage list, which has increased traffic to the area. It is still a  site of pilgrimage. There are many temples in the town area, and back in the day they offered basic accommodation to pilgrims. Over time this was expanded to include travellers in general.
We stayed at a temple called Muryokoin. One of the priests was born (this time, he assured us) in Zurich, which meant we had someone who could explain things to us.
We had a very large room 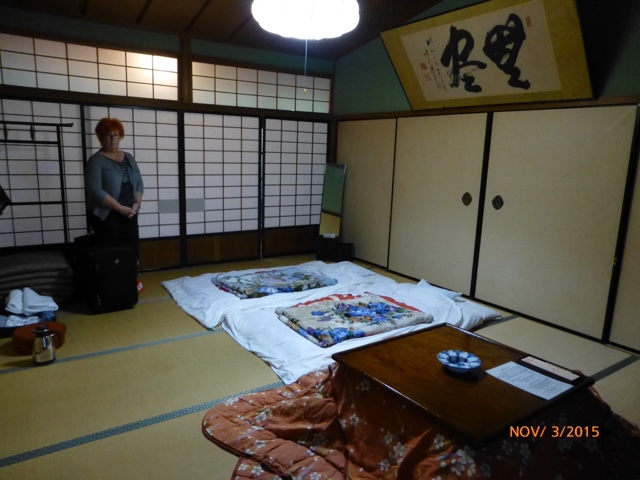 Notice the table in the foreground? Those blankets are attached to the table. We would snuggle up with our feet under the table – where there was a heater! Brilliant. We also had a space heater, which was a good thing, because wow was the place cold!  No heat in the building itself, windows wide open. But we’re toasty here. No private bathroom – men’s and ladies down the hall, and communal  baths on the other side of the building.
There is a specific cuisine at temples. It is, of course, vegetarian. But it is also non stimulating – no garlic, onions, ginger or chilis. We ate in a large hall with the non Japanese guests. 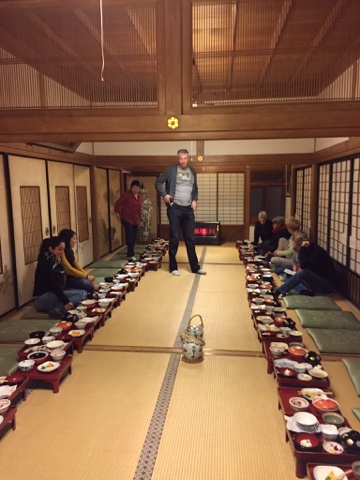 The food was good, if bland. And mostly soft in texture. Lots of it. You can see the tea pots on the mats. At the end of the meal, after we had finished our rice, the tea was poured into the rice bowl. That way not a grain of rice was wasted.
At this temple they conduct an elaborate service every morning, so we were up very early. We presented ourselves at the meditation hall just before 6:00 am. Fortunately there were chairs to sit on, and we were given a lap blanket. The floor was heated but the room was not. It was quite dark, inside and out and the candlelight sparkled off the golden decorations.
The service – a fire service- lasted almost 90 minutes and involved the burning of 108 sticks representative of 108 failings or attachments. The monks chanted, bells were rung, passages from books were read, offerings were made. It was very interesting and fairly mysterious. After the service the Swiss priest spoke to us about Buddhism, this particular sect’s beliefs and life in general. And then we had breakfast.
And yes, the town and the temples were beautiful. 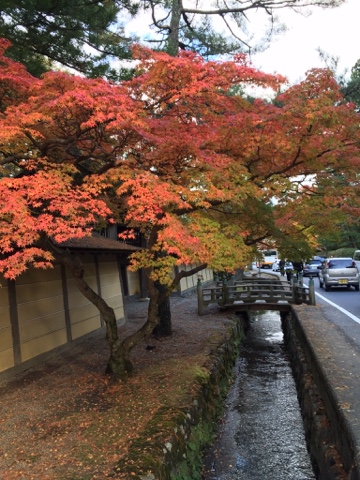 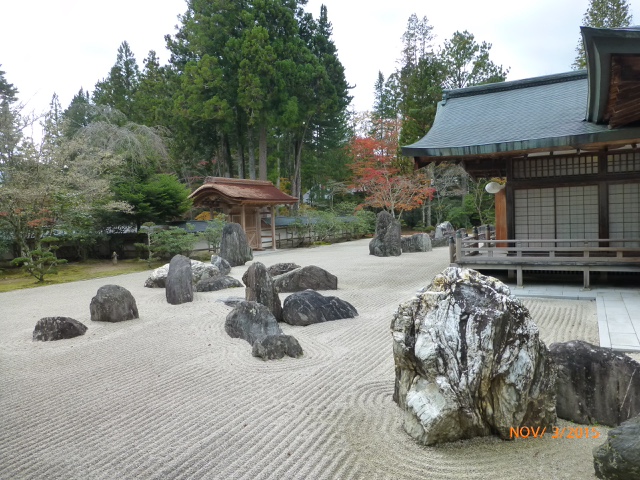 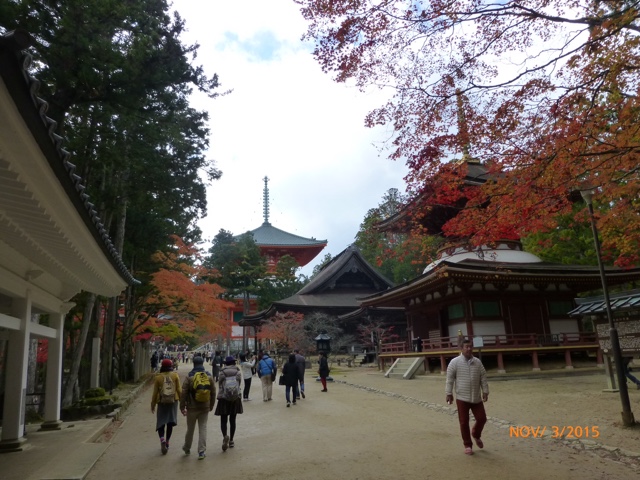