Japan is full of surprises. Too many to list. But we’ve really noticed one – how many people still smoke. Clearly there are attempts being made – no smoking on planes, trains, ferries, buses. But there are smoking compartments on trains. Designated smoking areas outside train/subway stops and office buildings. Given the Japanese attention to detail and preference for cleanliness those smoking spots are startling because there are actually cigarette butts on the ground!

But the real issue is around restaurants. Some are non smoking. Most have a smoking area – and we know how well that works. And many don’t seem to care. And people smoke hard – between every course, either at the table or they go outside.
We’ve given up on one coffee shop altogether. Caffe Veloce has nice coffee and pastries, but it is clearly a smokers place.
Most surprising to me is the number of very young people smoking. Quite different than Canada where smoking was made a workplace health and safety issue, which got it out of the restaurants. And of course there is the ongoing demonization of smoking in the west.
Enough on that – here’s a picture of s little cutie we met on her way to a Hallowe’en party! 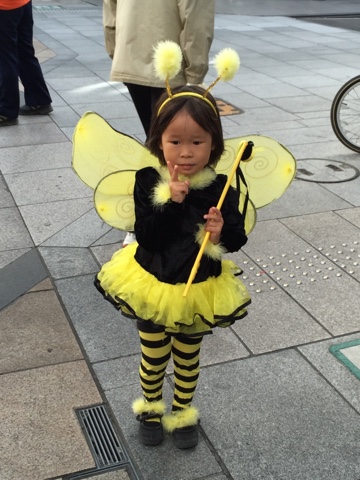