When we were working on the planning of this trip Bob McLure, one of our fellow travelers, suggested that we have business cards made up – English on one side, Japanese on the other. He even facilitated the translation and production of the cards for the group. Bob was certainly correct about the usefulness of having the cards – we exchanged them with people while in Niimi, but have continued to give them to people as we travel about.

Translating my first name wasn’t a huge challenge, as western names go. Japanese recognizes sha ro and n so three kana are required and we’re done.  (I don’t know how to make the iPad write katakana you’ll have to take my word for it.)
Wilf was a bit more of a challenge. Japanese doesn’t have a wi sound, nor an l, nor a standalone f. That means his name came out as uirifu. And of course his last name comes out as Rambo, which causes great giggles.  We stayed one night at a temple and the head priest was referring to Wilf as Rambo-San.
In Japan personal and corporate seals are used in most places where we would use signatures or initials. At the post office, for instance, if you were receiving a package instead to signing to acknowledge receipt you would use your personal stamp. That means that there are businesses that produce these stamps. In the west we hear them referred to as chops, which is the Chinese name. In Japan they are called hanko. Wilf found a little class we could take where we would learn how to carve our own stone hanko, so on Monday morning in Osaka off we went.
Rather than try to cram our whole western names into a little square the plan was to take the first letter of our translated name  – sha in my case, and u in Wilf’s. The shop owner and our guide then came up with several different kanji for that sound and we picked the meaning that we liked best. Then they wrote out several versions of the kanji and we picked the one we liked the look of the best. The master then inked the selected kanji onto the stone, provided us each with a small knife and let us at it.
No pressure. 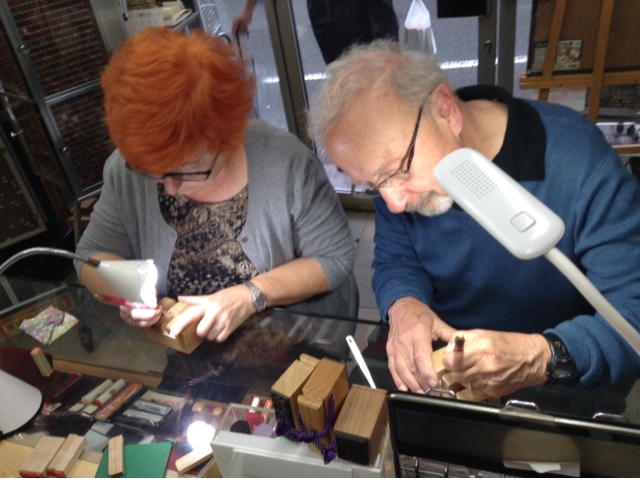 After we had carefully cut away for awhile and thought we were done the master, his wife, his father, the assistant and our guide all said nice things about our work.  Then the master and the assistant settled in to tidy up what we had done. 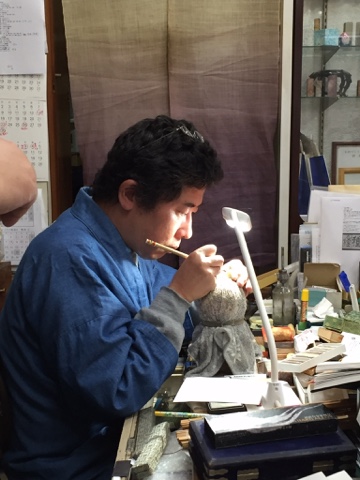 The picture below shows our two impressions. The top one on each sheet is our effort, and the bottom one is after a little remedial tidying up. The master also carved our names onto the side, along with a kanji that says ‘made this’ so it says Sharon made this and Wilf made this. 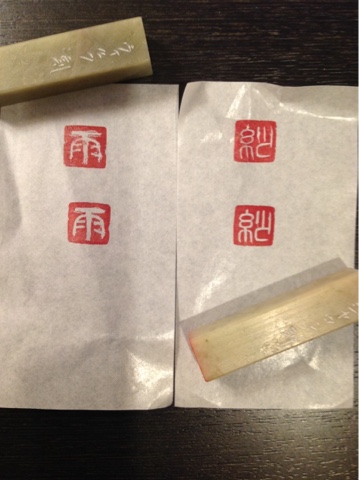 Uirifu on the left, Sharon on the right. 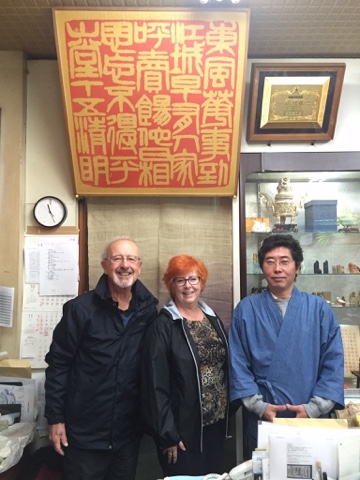 The master and his students!