A short ferry ride from Takamatsu is the island of Naoshima. Once upon a time it had a population of about 8000, now there are about 3300 people living there. Through a partnership with a publishing magnate the island is being turned into a big art experiment/exhibit. We decided to go and see, and decided that touring by bike was the way to go.

We had advice that the way to do the island was to go clockwise, because then the last part was all downhill – a big hill. I don’t know about you, but my experience says that a big downhill is usually proceeded by a big uphill…..
After a short ferry ride over we rented bikes (6 gears, padded seats, woohoo!) The road across the island followed the river valley, which made for easy riding. In the town of Honmura the Art House Project has reclaimed abandoned houses and spaces. We visited three of the houses in this tiny old town of twisting streets.
Our first stop was a purpose built building that houses a work by James Turrell, an American who works with light. Small groups are let into the space and left to sit in a darkness that is so utter that it almost defies description.  Eventually the light returns, so slowly that it takes a long time to register that there is a change in the light level. Eventually we figured out that we weren’t there to see a thing, but to have an experience. All three houses were like that – each completely different, but each about experiencing rather than just seeing. There was also a small museum dedicated to a Japanese architect named Tadeo Ando, who designed many of the structures on the island.
After lunch we headed for the other side of the island, where the big museums are. 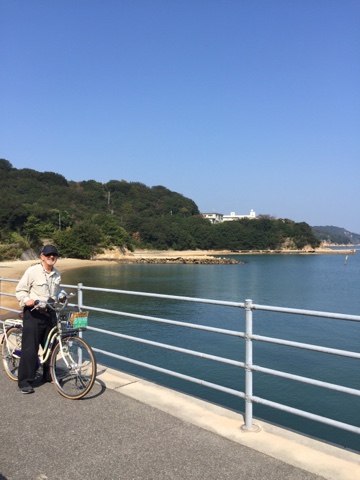 Wilf, enjoying the ocean view before it all became about the uphill.
These giant pumpkin sculptures by Yayoi Kasuma are an emblem of the island. 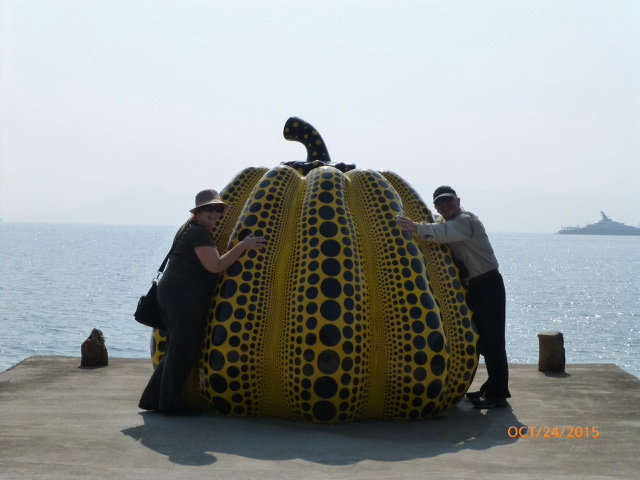 The yellow one lives on a pier at the Benesse House area. 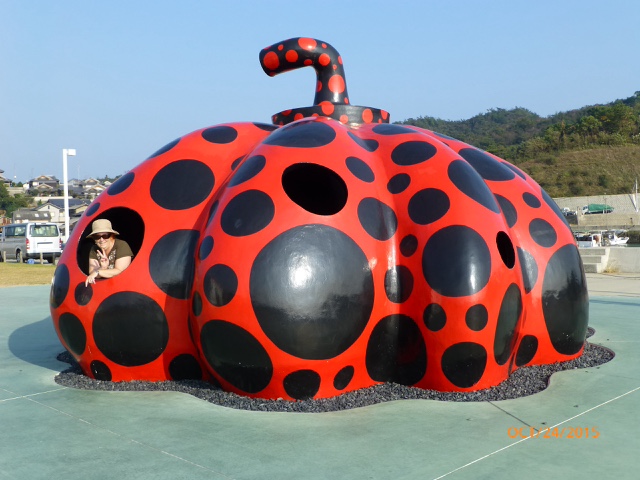 The red one is by the ferry terminal.
Given a combination of huge hills and the blazing sun we decided to concentrate on the Chichu Museum. First we had to push our bikes up a friggin mountain, but once at the top we found a most amazing place. The facility was designed by Ando, and he determined that the building would be under ground, and would use natural light. Seems like a contradiction, but it works. This is a place that takes itself very seriously – the staff are clad In white outfits with lab coats that make it look like they are going to perform some medical procedure. Access to the exhibits is controlled to limit numbers and we were asked to be silent.
One of the galleries contains 5 of Monet’s water lily series. Before entering we took off our shoes and put on slippers. Coming around a corner, through a large ante room the first and largest painting almost explodes into view. It is probably five feet by twelve in two sections, and in the diffused light it glows and fills the room.  It was amazing to see Monet in such a coolly contemporary setting.
There were also three more light sculptures by James Turrell. No sitting in the dark this time. But still surprising. I think I know how to look at a painting. But I’m less certain about experiencing light.
It was a big day. The art alone would have made it a full day. Add in an epic bike ride and I was very ready for the ferry ride back. 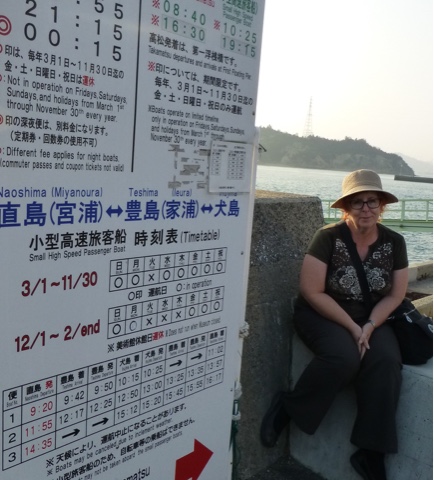