Last we spoke I was telling you about our bike ride across the Kibiji plain. We stopped at one point for a bite to eat and to try to figure out just where we were. While at the picnic area we met a couple riding the trail in the opposite direction. They were both from Italy, the Milan area, but are living and working in North Queensland, Australia. After a bit of chit chat he asked if we found it difficult to meet Japanese people. We agreed that the Japanese do not tend to sit in the town square, drinking grappa and watching football on tv. Nor do they make an evening promenade and chat with their neighbours. But difficult to meet?

Okay, Niimi was a bit unusual in that we were there to meet folks, but the language barrier didn’t slow things down too much with the president of the local chamber of commerce – we managed with the help of Sayuri-san to discuss the implications of the TPP and the possibilities of importing wagyu beef as a luxury item into Canada. 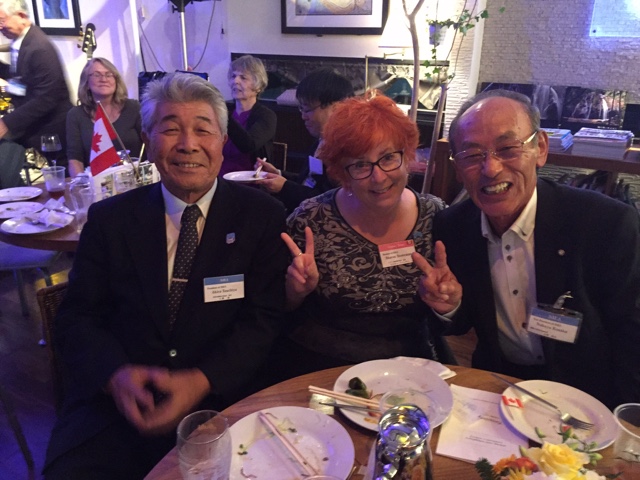 Really, we were talking about serious stuff!
On the train to Takamatsu Wilf and his seat mate, a bank manager, got to chatting. They were talking up a storm, and eventually got to ‘how old are you?’ That led to ‘and your wife?’  Long pause as the age difference was considered, and then, ‘how did you do that?
Once arrived in Takematsu we were looking for a lunch place – we had our map out comparing possibilities when a woman smiled at Wilf then walked over to see if we needed help. Soon we were walking down the mall, next we were having lunch together. Meet Junko 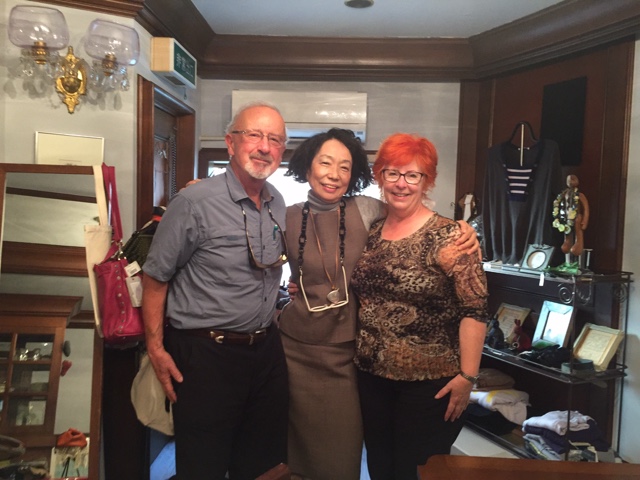 Junko owns a dress shop and once a week she and her friends meet with their English tutor to work on their conversation. As their class was the following day we were invited to join them. Which we did. And it was great fun.
That night we found a great chicken restaurant – grilled chicken on the bone. Before I show you this picture I will say in my own defence that the menu specifically said  ‘use a napkin, pick up the leg and chomp, chomp, chomp’. So I did, because the chopsticks were not cutting it! 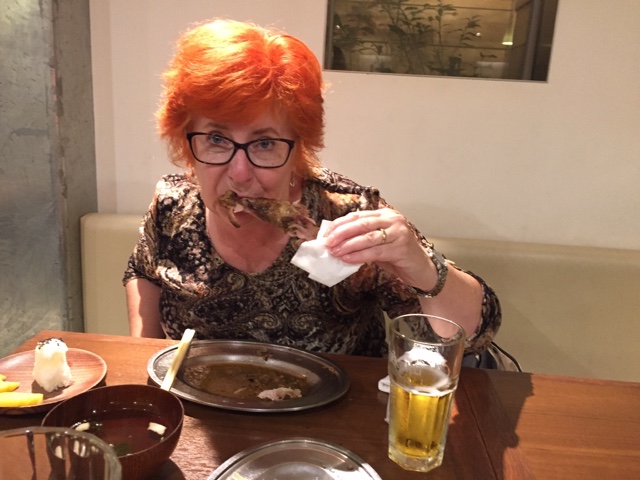 At the table next to was a fellow who turned out to be a pilot with ANA, one of the Japanese national airlines. He was curious about where we were from and how we found out about this specific restaurant. (Answer: Tripadvisor).  By the time he left we were up to speed about his family and his career and travel aspirations.
Last night we stayed at a guest house and met Shuhei and Yukiko: 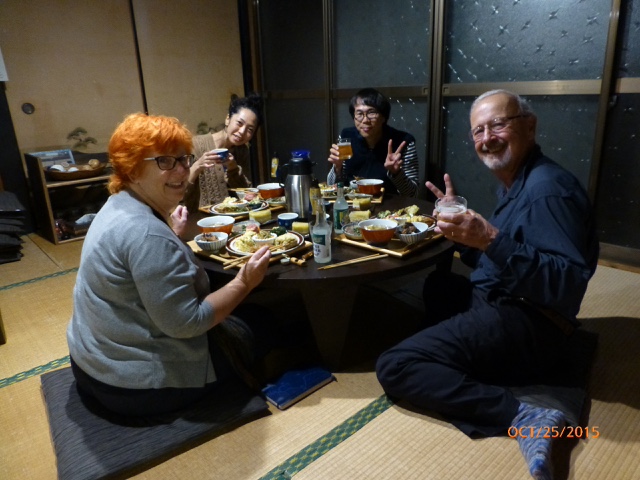 (In case you were wondering our meeting people incidents don’t always involve beer. Just sometimes)
So, back to the Italian guy. No, we haven’t had trouble meeting people. I’m probably too much the polite Canadian to say so, but his issue might have something to do with his big size, shaved head, big beard, many visible tattoos, his female companion’s facial piercings and tattoos. Perhaps they’ll find Tokyo more their style.

2 replies on “I beg to differ, random Italian guy”

Am loving your posts. You 2 certainly know how to make the most of your travel time.

Am loving your posts. You 2 certainly know how to make the most of your travel time.