Kurashiki sits to one side of a large agricultural plain. Our guide book notes that Kurashiki has avoided ‘natural and wartime catastrophes’, which has meant that it’s old city has been preserved. It is a major tourist spot with lots of shops, but we managed to do most of our touring late in the day when the crowds had thinned out. 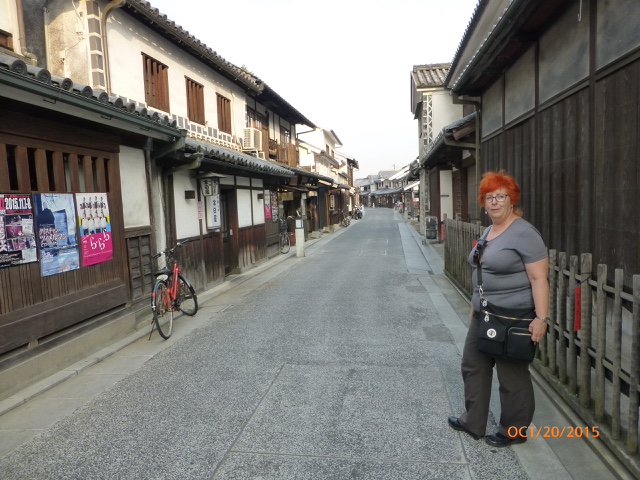 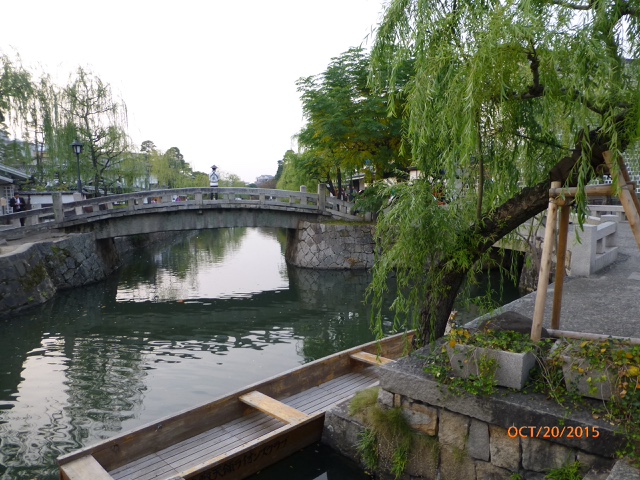 A canal.
Rickshaw drivers for rent: 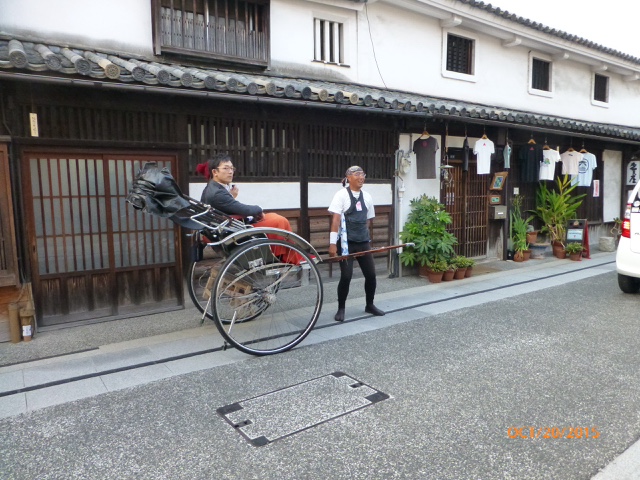 And so pretty at night: 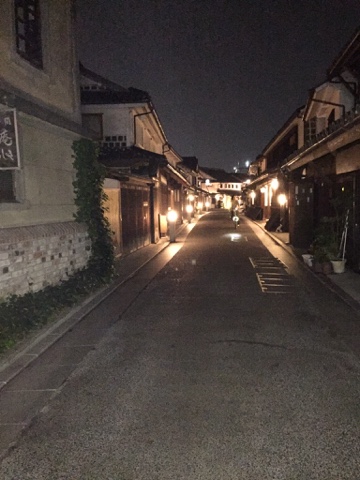 We took a train ride a couple of stops over, where we rented bikes for the day. After a short jaunt through the town of Soja we started onto a bike trail that would take us about 17k through the rice fields. We had what was referred to as a Mom bike – no gears, basket on the front, hard seat. Since pretty much the whole ride was flat it worked out fine. We had a detailed map -in Japanese, of course, and pantomimed instructions from the rental folks, so we felt pretty confident we could manage.
It was a beautiful day for a ride. 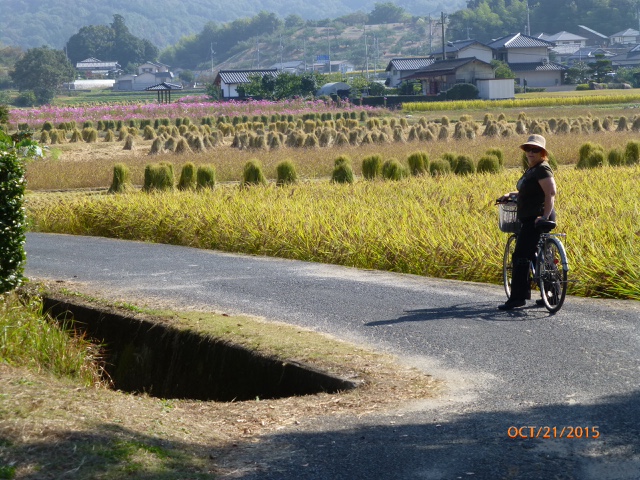 Lots of rice relate activity. Most of the time we were on what we thought was a dedicated bike path, but every so often a vehicle would buzz by – looks like a path, might be a road.
In addition to rice there were small market gardens and the occasional field of cosmos. 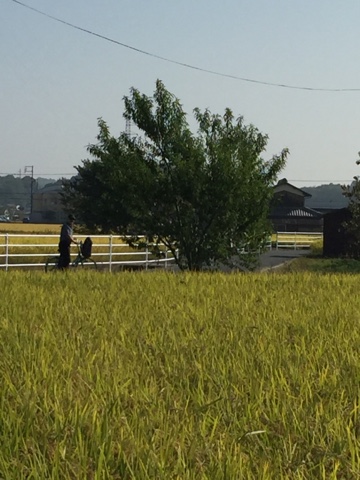 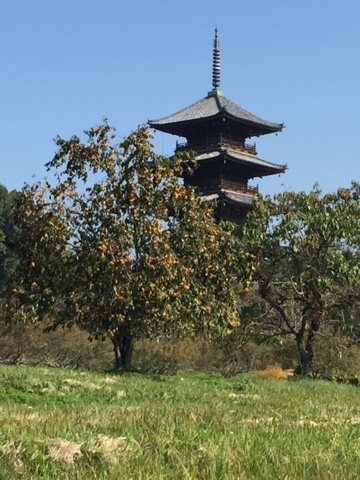 They say pride goeth before a fall, and of course just about the time we thought we had this all sort d we veered right not left and got ourselves on the wrong bike path. In spite of great efforts to convince ourselves that the map still made sense we eventually realized that the high speed train tracks we were riding under were not on the map.
So, some retracing of the route was required. On th one hand- we got lost. On the other – we got to see this guy at work with his little rice combine – smaller than a zamboni. 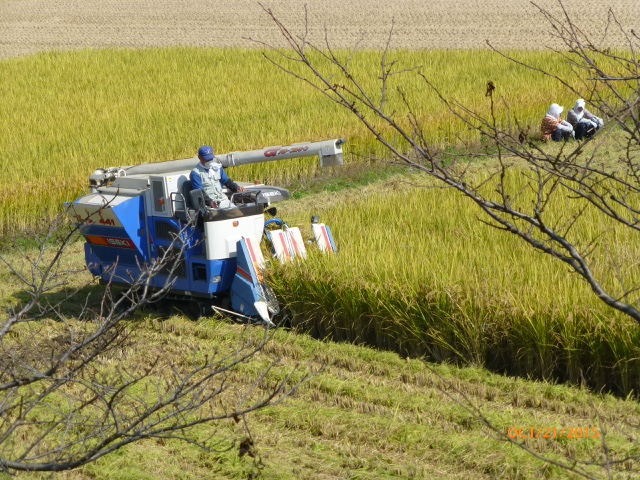 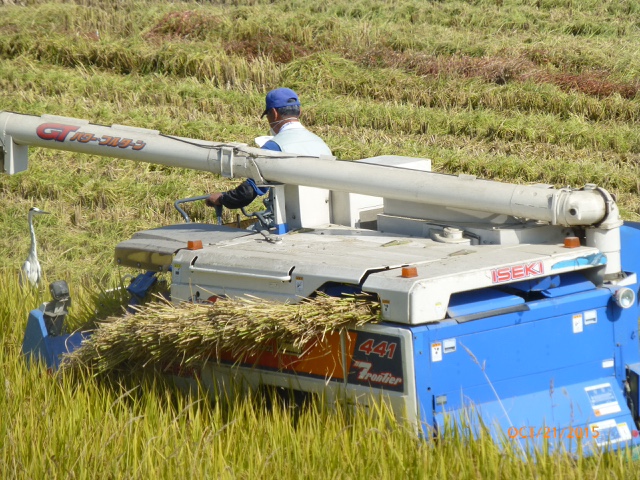 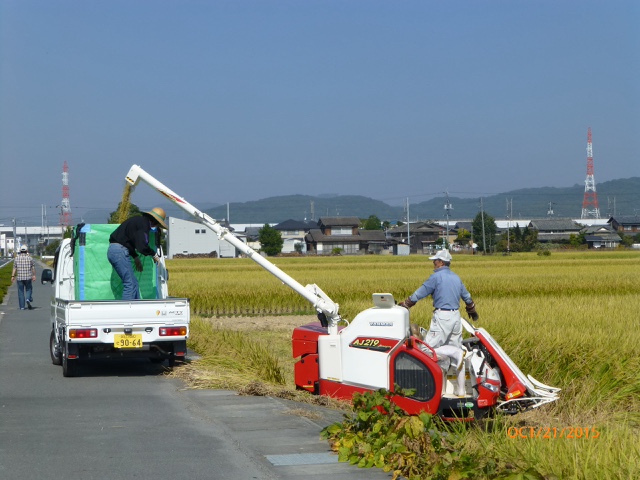 Okay, different guy at the end, but you get the point. Very interesting.
Once back on track we found our way. Had a tough time finding the train station/bike depot, but we persevered. There were no places for food directly on the bike route, but we had brought sandwiches. There were vending machines in strange places, though. Just as I’d be thinking ‘I could use another bottle of water’ we’d round a corner and there would be a vending machine at the side of the path, or the end of someone’s driveway. Very convenient.
So – a big day. The bath on the roof of our hotel seemed extra wonderful after all that pedalling.