In the west we see a man in the moon, but in some eastern countries there is a rabbit up there. And while we were in Matsue rabbits emerged as a theme. About an hour by train from the city is an important Shinto shrine, the Izumo-taisha.

Once upon a time a group of brothers were travelling to woo a princess. They came across an injured rabbit. Rather than help the rabbit the mean brothers caused it more pain. The one kind brother, however, gave the rabbit good advice and healed its injuries. The rabbit revealed itself as a God and blessed the kind brother with the hand of the princess. It also made this brother the deity responsible for marriage. 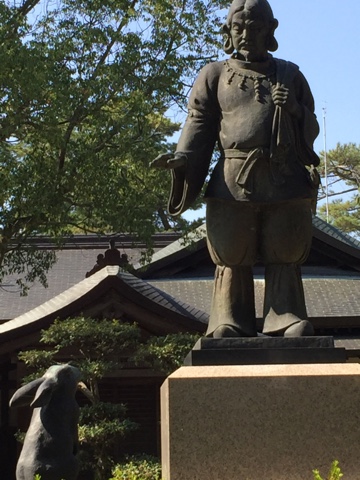 The kind brother helps the rabbit.
And there are rabbit statues all over the grounds. All carved out of granite! 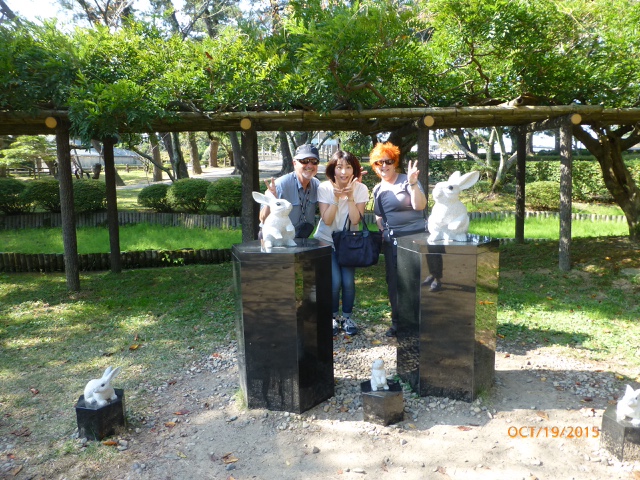 Making friends while checking out the rabbits. 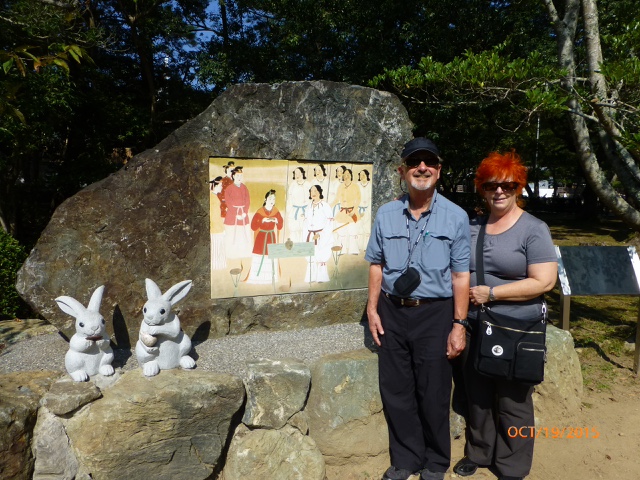 Rabbits sharing sake as done in a Shinto marriage ceremony. 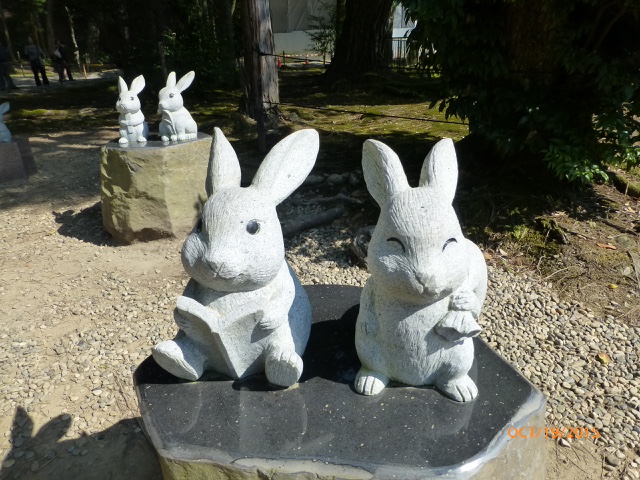 Really, they are everywhere. 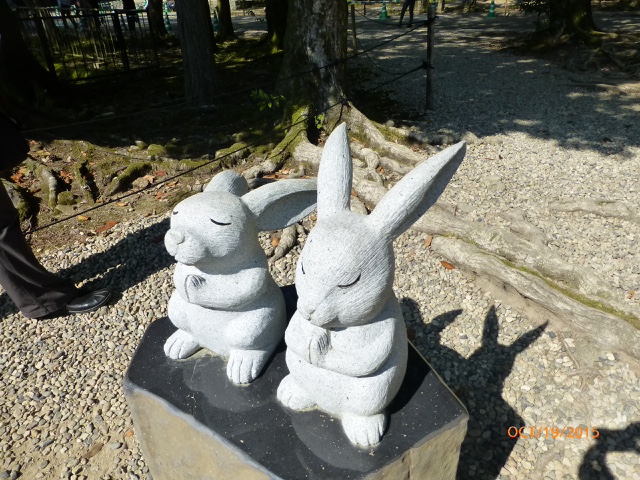 Even rabbits saying their prayers. At most shrines one approaches the appointed spot and throws a coin in a box. We then bow twice, clap twice ( to summon the god) and bow once more before offering a prayer. At this shrine the difference is that we clap four times to summon the god.  This is a busy shrine, with lots of singles wishing for marriage and lots of married couple giving thanks.
The shrine is also famous for having the largest rice straw rope in Japan hanging from the rafters: 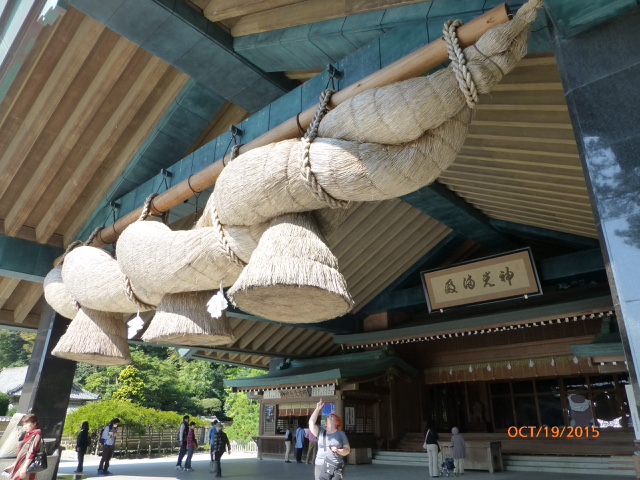 Outside of the shrine was a rabbit themed gift shop that had many of examples of rabbits holding a good luck charm called a magatama. 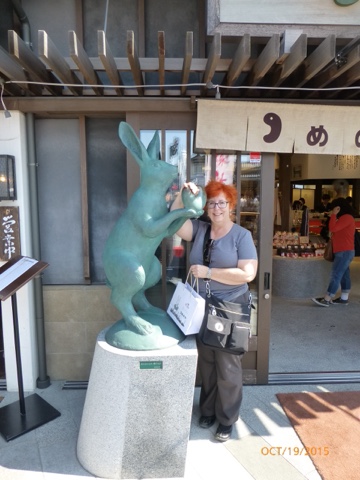 On the way back to Matsue we stopped at the Vogel gardens, which turned out to be an enormous park setting full of flowers and birds.  They are clearly set up for huge crowds, but late day on an October afternoon we had the place to ourselves. 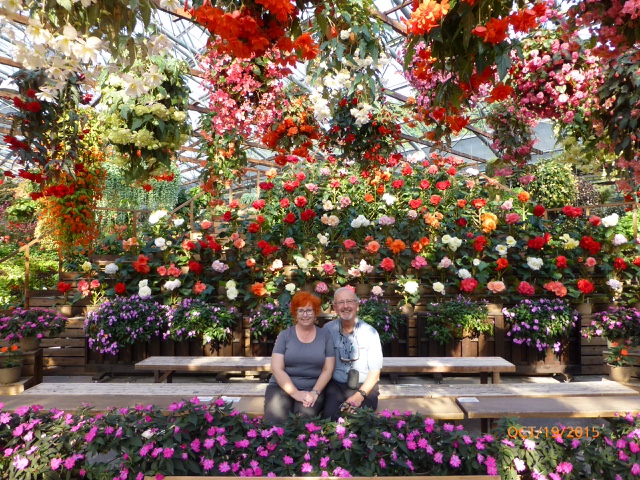 The official group picture spot was clearly meant for more than two people!

And then there were bird encounters. 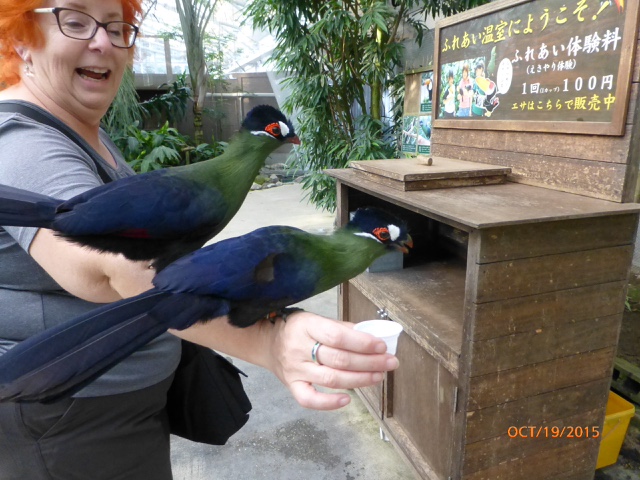 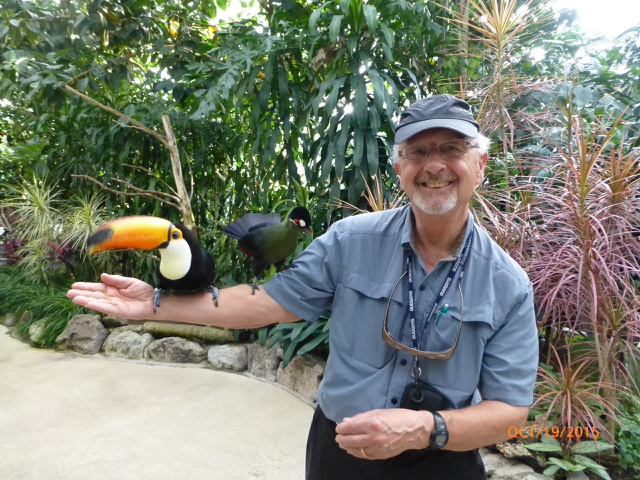