From subtropical Brisbane and the Sunshine Coast we headed north to Cairns. Just in time, too. A huge cyclone made landfall on Friday in the area. When we woke in Noosaville on Thursday the rain had begun and when we got back to Brisbane things were starting to get pretty wet.

Then we got to Cairns. No cyclone here – in fact Cyclone Maria was tearing things up to the south and Cyclone Lam was swinging North, leaving things hotter, sunnier and more humid than normal in Cairns.  And you know how I love hot and humid, right?
In the hills above Cairns is the town of Kuranda. Once upon a time it was important to the logging and mining industry.  At some point in time the hippies discovered it, and now it is a tourist day trip town. Back in the day a narrow gauge railway was built up to the town, and it still operates. There are several ways to get to Kuranda – bus, private car, rail line and cable car. We took the cable car up. 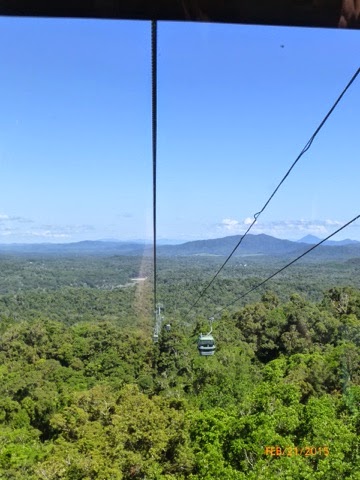 It was quite wonderful skimming above the rainforest, seeing how it changed as we moved from one side of the hills to another. There were two stops along the way, where there were boardwalks that took us out through the forest. And Mike from Austria was the friendly and informative naturalist 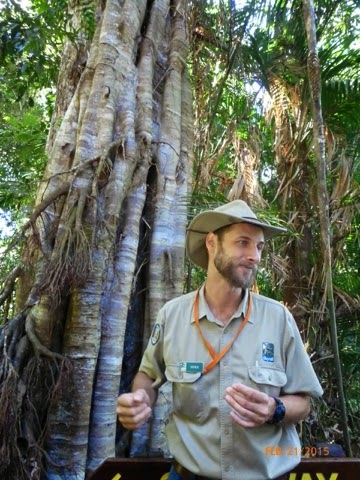 He made sure we knew what we were looking at. Things like this… 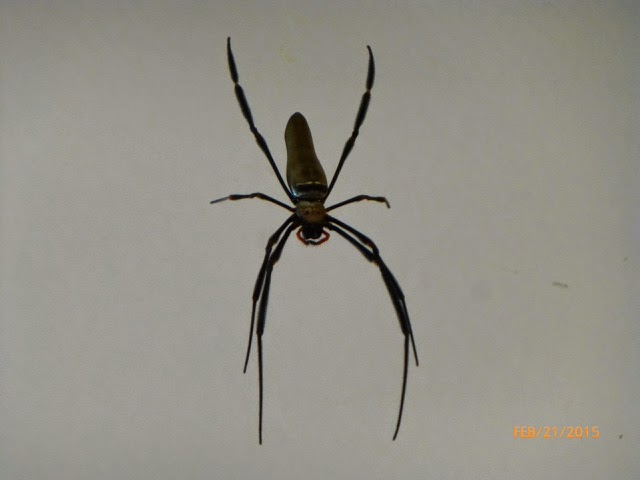 Female golden orb spider – I was waiting for Wilf at the interpretive centre, looked up and saw her above me. I moved.
Way on the other side of the gorge we could see the train making its morning run up the valley. 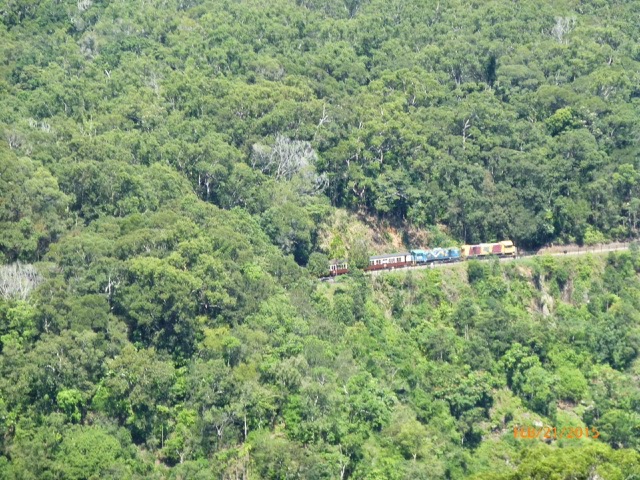 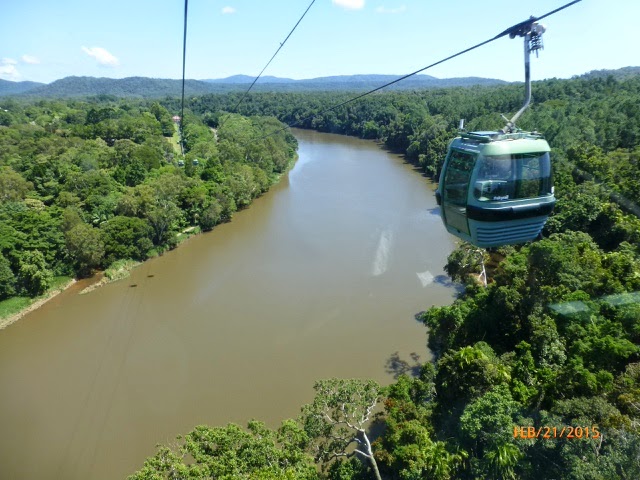 Being that it was a summer Saturday and Chinese New Year and there was a cruise ship in Cairns – well Kuranda was hopping. We decided to head for the attractions and try and beat the crowds – and the heat.
First up – Koala Bears!!! 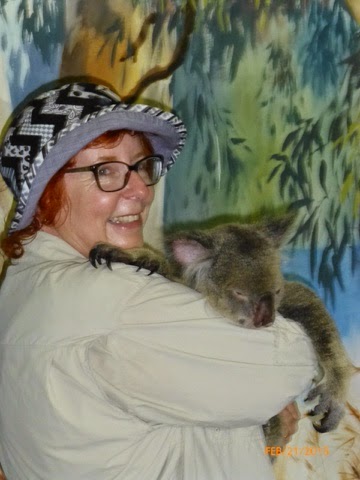 A little sleepy bear!
At Birdworld they told us to take off all jewelry and hearing aides and shiny things before going in. So, were standing there and I fell something land on my head. ‘Wilf, what’s on my head?’  Nothing. Again –  ‘Wilf! What is on my head?’ I finally got his attention and this is what was going on. 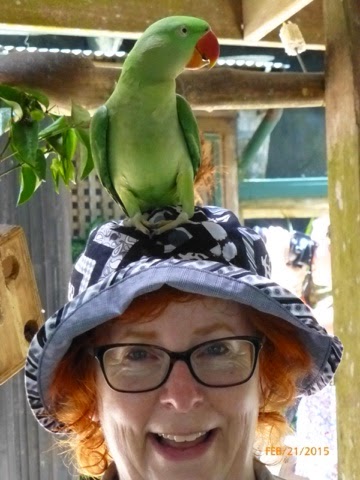 Actually Wilf was of much more interest, what with the buttons on his shirt and his sunglasses. 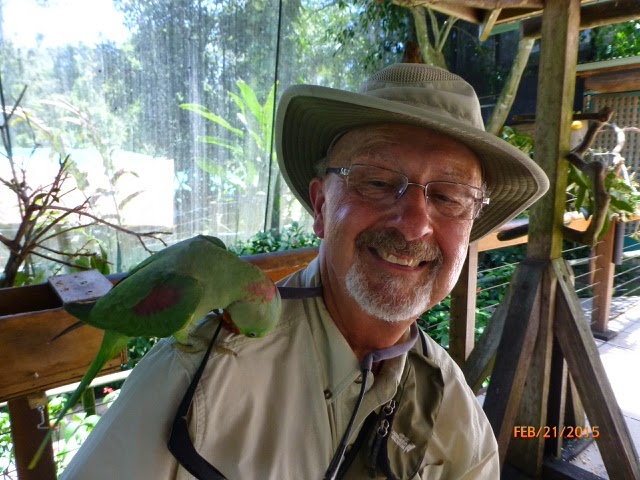 And while we were there – another cassowary! 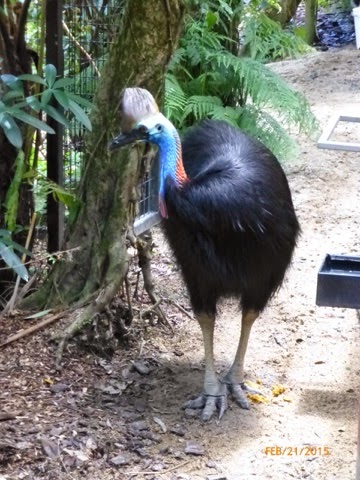 And a black swan… 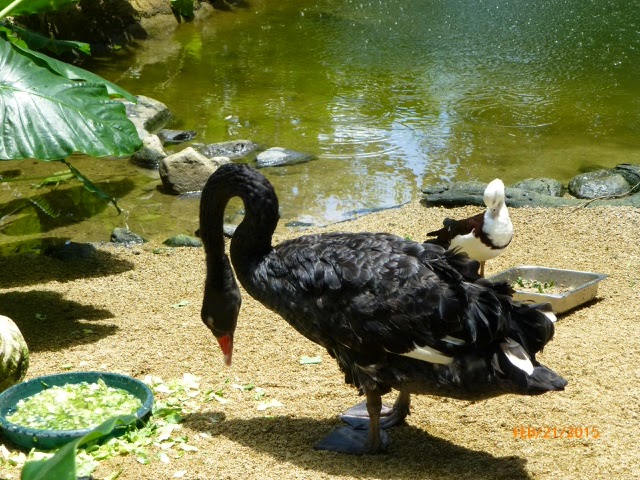 And then, after bears, birds and butterflies a ride back down in a heritage train car. The rail line was a real engineering marvel, full of twists and turns and tunnels and bridges. It was built in the late 1880’s –  34 very challenging kilometres.
Great ride! 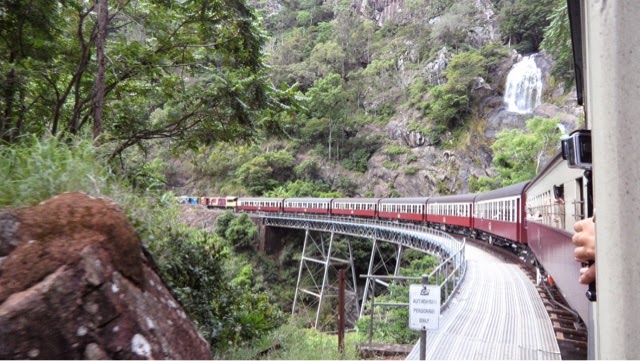 And a cool one to refresh on the way back 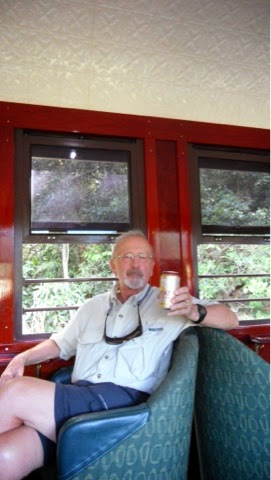