So, the world cup of cricket is underway. But you all knew that, right? Riveted to the tellie?
On Saturday evening we took a look – Australia had just finished it’s innings and they were on a break. We went out for a walk and then dinner and upon our return  England was into it’s innings. We settled in with the iPad at our side, knowing our friend Mr Google would explain things to us. We know the broad strokes of the game, but there are many details to get sorted. And statistics – yikes! Puts the baseball boys to shame.
I thought we were doing well, figuring out what was going on until the very end. There was a penalty – or there wasn’t. The batter was out – or he wasn’t. The other batter was out? Eventually a call was made and the game was over. Australia over England by 111 runs. We looked at each other ‘What the what?’ I turned to Twitter for clarification, only to discover that all of Twitter was biting its paws in a rage over the call. It wasn’t just us not understanding, apparently.
Turns out we missed one item of interest in the Australian innings: 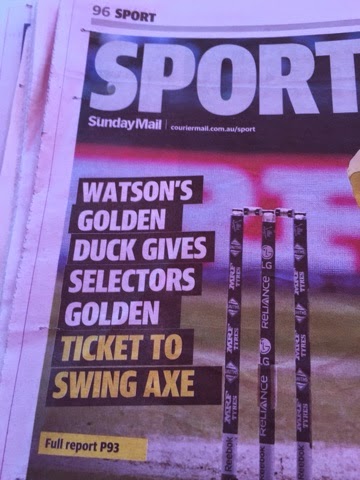 A golden duck is when the batter is put out on the first ball bowled to him. No score, thanks for coming out.
So, we’ve either been watching a game or a recap in the evenings. We’re starting to be able to tell which teams are better and see some strategy. Yep – another decade or two of watching and we might know enough to have an opinion.