We’ve been snorkelling before, and enjoyed it very much. We figured – snorkelling in Australia, more of the same.

Boy were we wrong!
It was fantastic!!!!!
We knew we were going to take a trip to the reef – who would come all this way and not? The question was – how would we do it? There are many choices. We decided we wanted a smaller boat experience, rather than taking a big boat out to a platform with hundreds of people. We also wanted to deal with snorkelling – no scuba. We settled on a company called Wavelength, and they were super. They picked us up and we joined the group at the marina – 30 passengers, three crew. From Port Douglas it is about an hour and a bit to the reef.
We were very lucky with the weather. It has been blazingly hot, humid and sunny – the cyclone to the south had swept away all the cloud cover. Yesterday was still hot and humid, but high cloud cover had returned, reducing the chances for spontaneous human combustion.
Because it is summer here the ocean is warm – about 30 degrees. Makes for easy swimming. Also means dangerous stinging jellyfish are hanging about. Not so much, maybe, on the outer reef. Maybe. But the beaches have nets up to provide safe swimming and we were told not to wade on the beach outside the netted area. And there are also stinger suits. On our snorkel trip we were all issued a suit. Black Lycra onesie with built in mittens and a hood. Very fetching. We were assured that there really weren’t stingers as far out as were headed. Probably not. Hardly ever. The real purpose of the suit was sun protection. Which was a good enough reason for me. Quite a sight to see 30 people in their swimsuits, already hot and sweaty, trying to fight their way into slightly damp stinger suits. No one got hurt in the process!
We made three stops to snorkel and each one was magical. 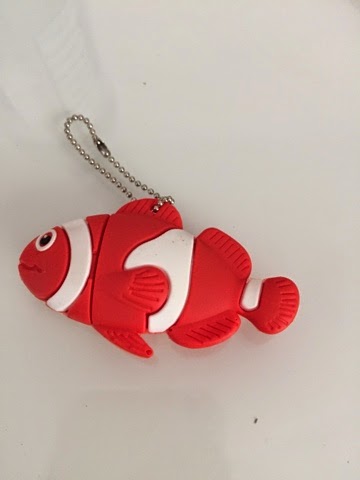 I know – isn’t he cute? Well, we really did see anenome fish, among many other things. We don’t have a waterproof camera, and we could have rented one, but I wanted us to concentrate on the experience. I wanted us to be comfortable and relaxed in the water, and we were. The little guy above is actually a flash drive, loaded with pictures from the day. When we get home we can relive it all again.
We did see many wonderful things, including a white tipped reef shark and more colourful fish and fascinating coral than you could shake a stick at. An amazing variety. Huge underwater structures. But the most amazing thing to me, and something I never expected to actually see where the giant clams. Truly huge! And they would close up if something passed over their light sensing spots, which was  really cool.
Truly, the reef delivered,and then some.  And because I love you all and am dedicated to your entertainment – here we are I our stinger suits: 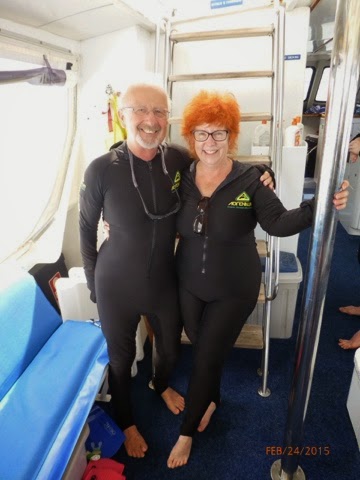 One thought on “As promised, so delivered”