I had a comment that travelling in Australia must be easier because we understand the language. Well. Yes, In theory. Certainly we don’t have the challenges of, say, Japan. But all is not obvious – I could and probably write about coffee culture here. Ordering a cup of coffee is not a straightforward thing. But that is not the topic for today.

Politics at the federal level here is in the midst of a big to-do, which leads to the new phrase. The prime minister is faced with a leadership spill. In Canada a spill would likely have something to do with petrochemicals – right? In this case, it appears to be a case of a loss of confidence in the leadership of the prime minister. By a member of his own party. There will be a vote either tomorrow or Tuesday and the media, at least is totally obsessed. It does seem like the Australian political parties like to eat their leaders, loudly, publicly and fairly often.
But, speaking of Aussie politics. The New South Wales Liberal party is having a meeting at our hotel, and when we came out this morning look what was outside. 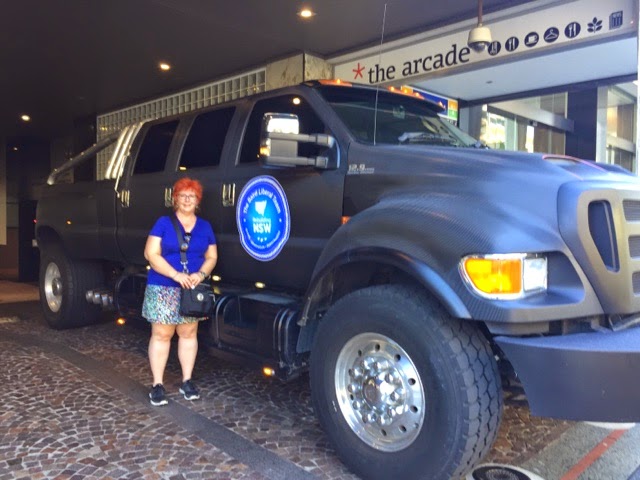 I’m short, but come on – that thing is huge! The label on the grill says ‘Behemoth’. The blue label on the side is advertising the candidate – a Mr Baird. We were stunned. Can you imagine a Canadian politician being associated with a thing like this? With a 12.9 litre engine? Our politicos have buses that run on fryer oil, or pure thoughts and good wishes. Hard to imagine one having their name on something that looks like it could eat a Hummer for lunch and use a Smart Car as a Tic Tac.
And hey – speaking of things that are different and eating things for lunch. We’ve been watching rugby. I think those guys eat crybaby footie players for lunch. Tis a very fine line between rugby and a brawl!