I So there I was. 9:15 this morning. Getting a breathalyzer test. First time ever. But Mom – don’t panic! It turns out that before they’ll let you climb the Sydney Harbour Bridge you have to prove that you are sober. Doesn’t matter what time of the day or night. No drinken fools allowed!

I first saw pictures of the bridge climb during the Sydney Olympics in 2000. I told Wilf that if we ever got there I was doing it – with or without him. Of course during the ensuing 15 years we’ve done the Grand Canyon Sky Walk, the giant Ferris wheel in Yokahama and other adventures, so away we went.
In order to be certain that Nothing gets dropped onto the 8 lanes of traffic or the two train lines everything is very tightly controlled. We were issued jumpsuits and tethers for our glasses, sunglasses and hats. Our wireless radios and headsets were also clipped to us. If they didn’t think your shoes were up to the  task then appropriate shoes were issued. If it had been cold or wet then rain suits and fleeces were available. And gloves. With clips…
We also had wide belts that had a cable with a clip on the end. It connected to a wire system so once we started onto bridge we were tied on.
We walked out under the bridge below the roadway. Eventually we came to a system of ladders – more like steep stairs. Up up we went, at one point emerging between two lanes of traffic before continuing up into the bridge upper structure. We were thoroughly caged in and busy climbing so the traffic was incidental.
Once we were up top we began to climb up the curved top of the bridge. Because we had solid metal decking to walk on and hand rails on both side, and our cable tether I didn’t feel overly exposed. And the climb up was more like a long flight of stairs.
In yesterday’s post I had you look for the two flags on the top of the bridge. That is where we went. Amazing views all over the city. We weren’t allowed to carry anything with us, including cameras. Pete our guide took pictures, including a group shot at the top. 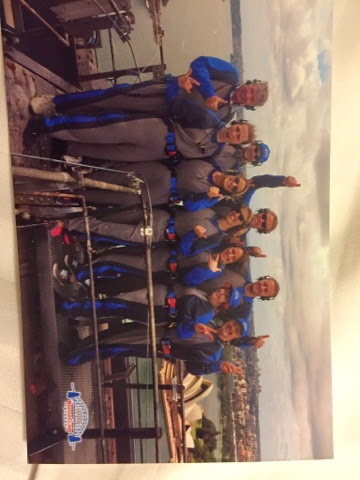 Aren’t we all so snazzy in our jumpsuits? (And no I do not know how to rotate the darn picture and Wilf won’t let me go to sleep until I finish this so you are just going to have to turn your head)
We had a breezy overcast morning, which was great. I’m so glad we did it!