Before we left home we made arrangements to tour a tiger sanctuary in the north of Thailand. A forest monastery had been established, and the monks had taken in an orphaned baby tiger. Next thing they knew they were in the tiger sanctuary business and they had 117 of them and a whole business to deal with.

On our tour morning our guide Jay met us at 4:30 in the morning. Mr. Wit, our driver was waiting with his very comfortable car and we set off in the dark. There was very little traffic and we sped our way north. At about 6:30 we stopped at the bridge on the River Kwai. By this time the sun was fully up and we could admire the scenery and consider the history of this famous place. This was also a breakfast stop – we bought congee from a vendor – a bowl of boiled rice, almost like porridge with a soft boiled egg, bits of chicken, green onions and garlic, mushrooms and an excellent sauce.

We arrived at the tiger sanctuary just after 7:00. Other visitors were beginning to arrive. We signed waivers and then got set up for the first event – distribution of food to the temple monks. We were instructed on protocol and at 7:30 about 20 monks arrived. Once we distributed the food (arranged by our guide) the group was ready to walk to the temple.

The first event was to feed the baby tigers. In pairs we were assigned to a tiger keeper and a volunteer and went up into the sala, a large open room with a wide veranda around it. The tigers were stationed all around the veranda, waiting for us. The tigers (ranging from 1 month to 7 months in age) were on leashes that were fastened to the floor so they could move about but not bolt away. We were given a bottle of milk and settled onto the floor to feed them. The tigers are all about the milk and will lay in your arms, eyes closed, happily drinking milk. Immediately upon finishing their milk they fall asleep. While we are feeding the babies the monks are having their breakfast in the centre of the room. After they eat the abbot leads a short service/meditation. After the service excess food from the collection is laid out for the visitors, staff and volunteers. The babies eventually woke from their milk stupor. They were willing to engage with us, but it pays to be careful. One was licking Wilf’s arm when it suddenly gave him a good nip.

After the feeding the babies are walked on their leashes back to their compound, where our next task was to wash them and feed them some cooked chicken. After this we could either go help exercise the babies, or the 12 to 18 month size tigers. We went to meet the middle size tigers. We went into a high walled enclosure with a water filled moat in it. We were each issued a long bamboo pole with plastic bags and bottles on the end – sort of a giant cat toy. Six medium size cats came in and sure enough they were interested in playing with these toys – there was much jumping and splashing by these quite large cats.

The third event was to meet the big cats. Two big cats were waiting outside the tiger living area. These are the big guys – 220kgs or more each. We we able to take turns (carefully) walking them down to their play area. When we got there four more tigers were waiting. We had our pictures taken with one of the big cats and then all six of them went for their exercise. They have a large pond to play in. The trainers had toys to attract their attention, and again the tigers were jumping and chasing they toys and each other. Like house cats. But huge! That was the end of the tiger tour.

Next up Jay and Mr. Wit took us back to the River Kwai where we went for a swim with a most charming elephant. Her handler helped us up onto her back, where we scrubbed her with brushes while she ‘helped’ by dousing us with copious amounts of water. Over and over! It was quite a sensation to be clinging to her back while she walked in the river. Eventually she gave a mighty shake and dumped us into the river. A water fight ensued – she won that, too! We played in the river with her for a bit, then we got back on board and she gave us a ride back up to where we parted ways. It was great fun and very refreshing.

Before heading back to Bangkok we stopped for an excellent lunch. The ride back took about 3 hours, and we had a long nap on the ride back.

All told it was a 12 hour day and it was great. We came back with over 500 pictures just from the one day – there’s a big edit job ahead. I’ll leave you with a few… 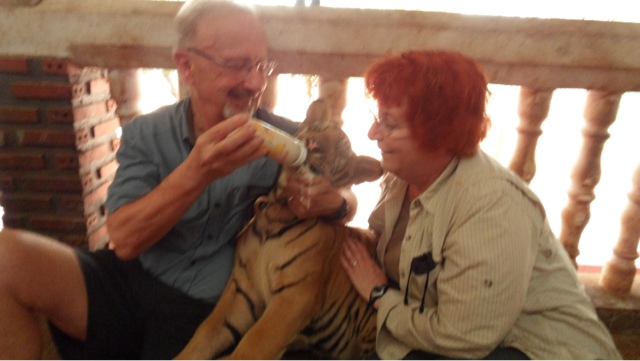 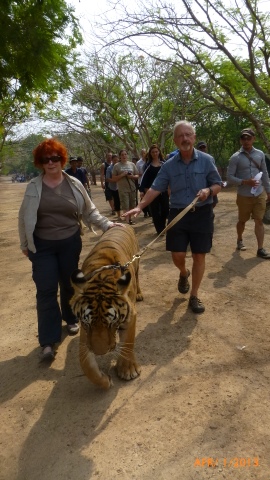 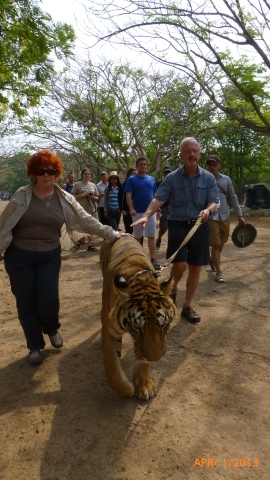 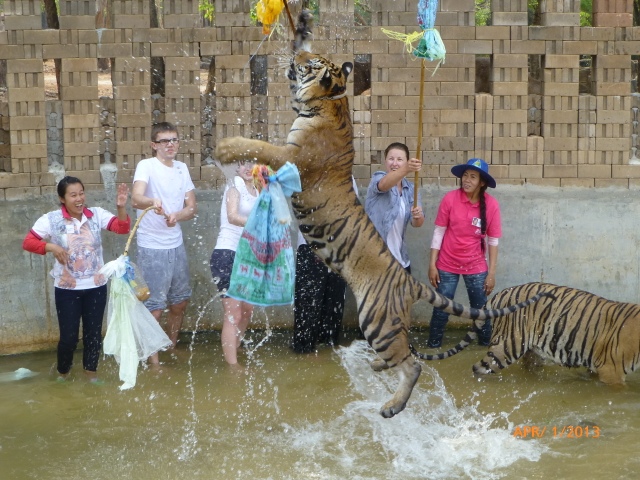 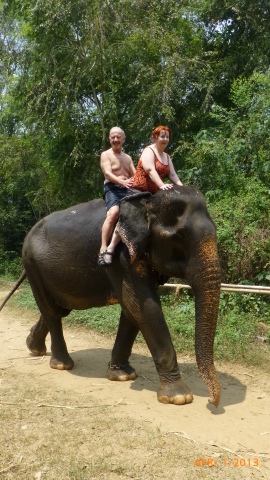 One thought on “Feeding the tigers, washing the elephant – all in a day’s work.”