You may think, from our stories, that we’ll eat anything. Not so, actually. Well, maybe Wilf will…..

We did have two things, though. We both said we wouldn’t eat whale. And that we couldn’t eat raw chicken. (Even though we both agreed that if we were going to, Japan would be the place with its high standards regarding freshness and cleanliness)
Well. 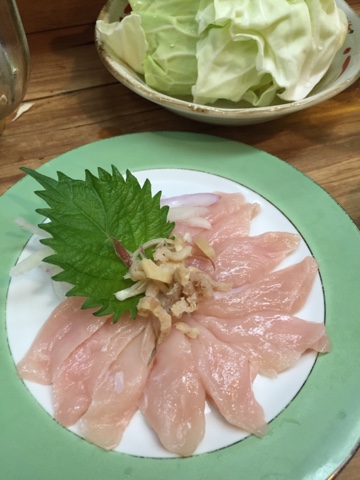 Never say never!
In Matsuyama we tracked down another chicken restaurant. Not quite a beak to tail establishment, but pretty close. We were looking at a set menu to share and there it was, included in the set.
What the heck. We went for it. It was early in the evening and the proprietor was making sure we were well looked after, which included practically dipping said chicken in the shoyu (soy) sauce when he thought we weren’t using enough. ‘More, more. It will be more delicious.’
Actually, there’s not that much to taste with chicken sashimi. Mostly it’s rather chewy. Certainly not the melting texture of raw fish.
The chicken sashimi was followed by an extravaganza of chicken – grilled, skewered, mysterious crunchy bits on salad, deep fried chicken skin served like potato chips and a stellar chicken broth with a big rice ball.
Man oh man – it was all good.  Oishi! 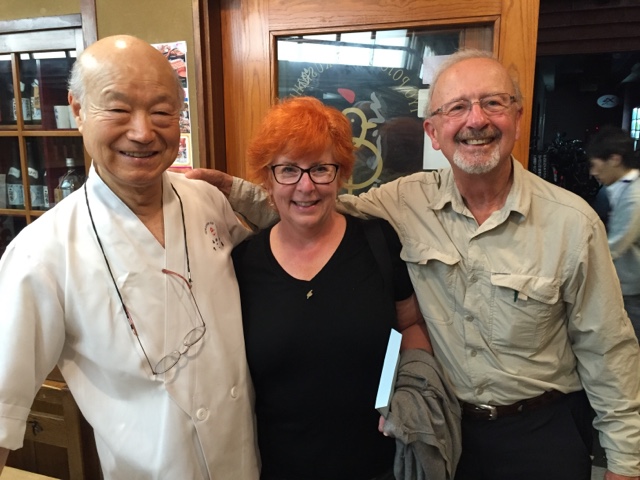 Making friends with the chicken man!