One of the reasons we are in Niimi this week is to see the Samurai Festival, which held yearly on October 15. The centrepiece of the festival is a parade through the historic part of town which recreates the processions made by samurai lords as they moved between their home lands and the capital in Tokyo.

The day began at the Funakawa shrine. As we began to climb the long flight of steps we saw men in costume making their way up to the temple. 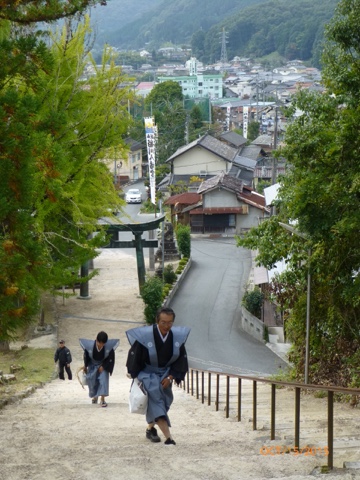 Special sake had been brewed for festival and we stopped for a little bowlful – it was white in colour as it was unfiltered. 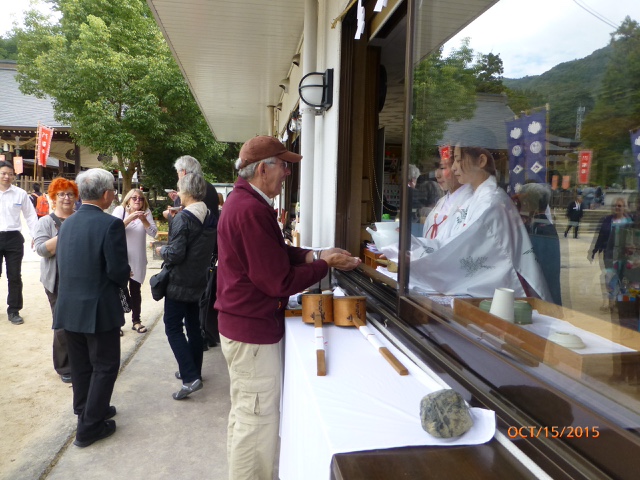 Some of the participants were in blue robes, which were pinned up so the wearer’s arms and legs were free. Other participants were dressed very formally. The gentleman with Steve, Fiona and Patricia had been with us at a very lively banquet the night before, but here he is much more solemn. 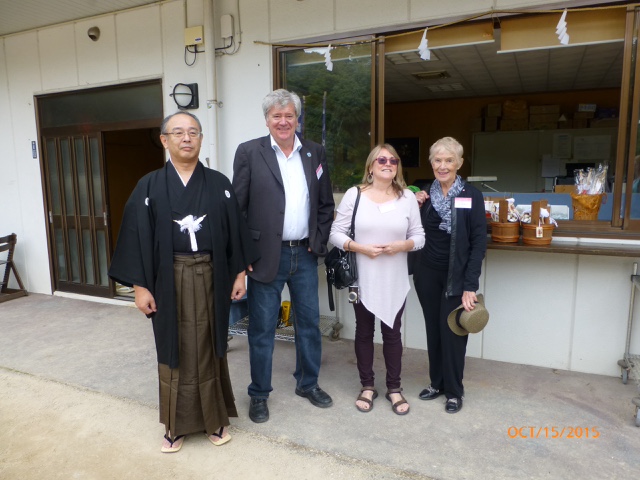 While we were at the shrine we paid our respects to the resident deity. 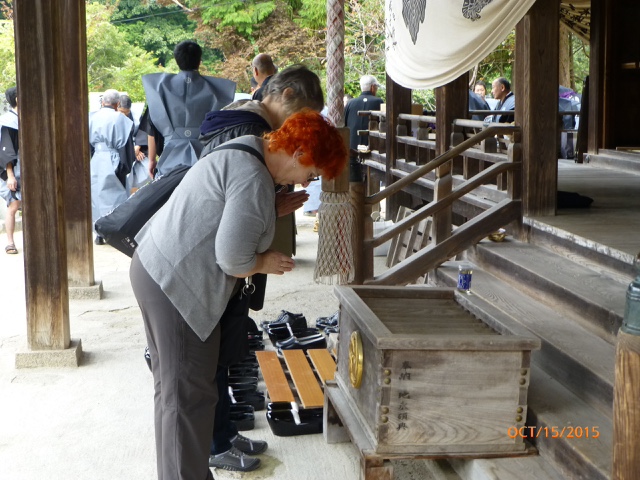 Eventually all the participants had assembled, along with the mayor, and a group photo was taken. 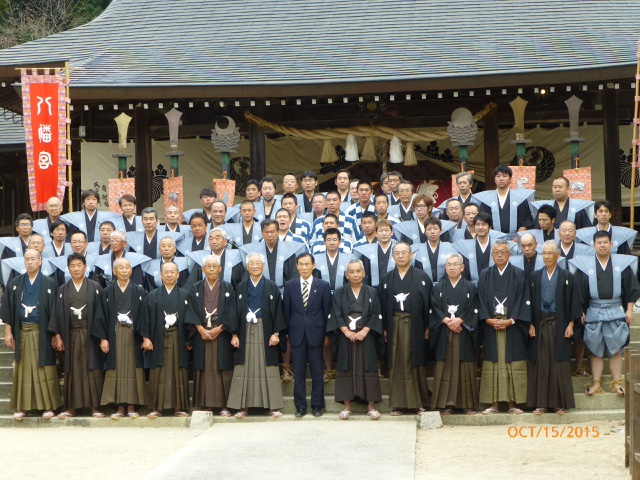 Immediately after this picture another one was taken with the eight of us included – didn’t expect that!

Back in town we were given a spot to sit beside the mayor’s reviewing stand. We were instructed in etiquette by the parade marshall – no standing, no cheering, no commotion. So – no Stampede parade behaviour. Misconduct would cause the parade to stop and a marshall would come over to give the trouble makers a tap with a switch as punishment. 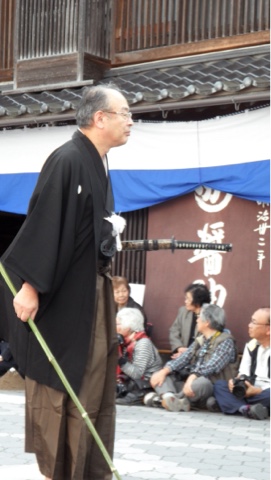 Back in the day total respect and obedience was expected when the samurai passed by and it is still taken seriously. 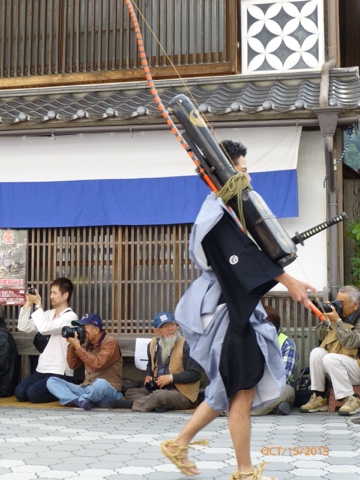 A long procession of samurai carrying an assortment of weapons and paraphernalia.
Note the guys across the street with the cameras. We thought maybe they were the press gallery, until the press did show up in their green vests. 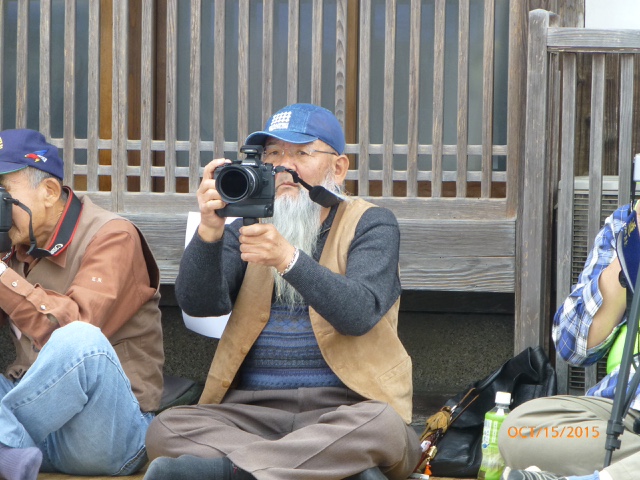 These guys seem to be with the local camera club. Between them and the press I was afraid to scratch my nose or do anything untoward because a lot of pictures were taken of us.

Once the samurais had passed you could feel the crowd relax as we awaited part two – the procession of portable shrines from the local shrines. This was the the boisterous part of the parade as teams would carry these huge heavy shrines down the street. Every so often they would stop and start shaking the shrine all around. Apparently this is to awaken the god within the shrine and have him bestow blessings. Since we were beside the main viewing stand they all stopped so we were well blessed. All of this is accompanied by lots of whistle blowing and cheering. 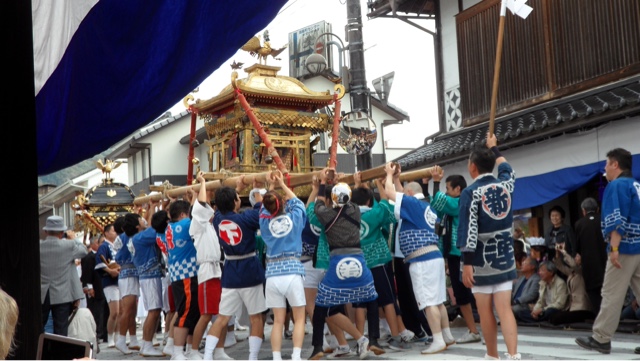 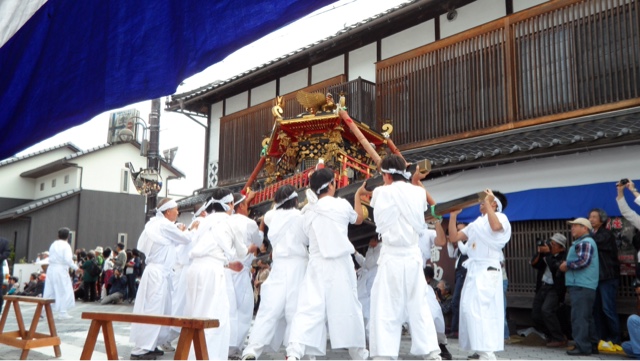 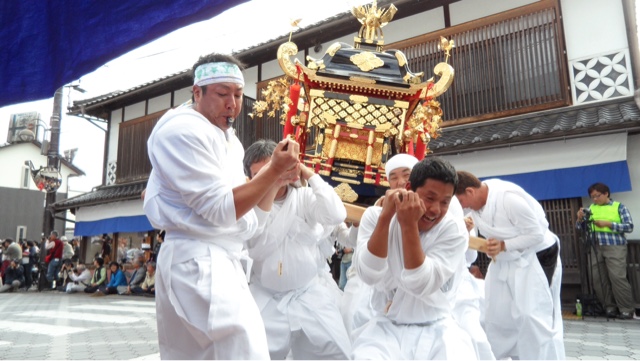 These things weigh as much as 500kg so the effort required to be a bearer is pretty substantial.
After the shrines come the children with their kiddie sized shrines, made of paper.
So cute! 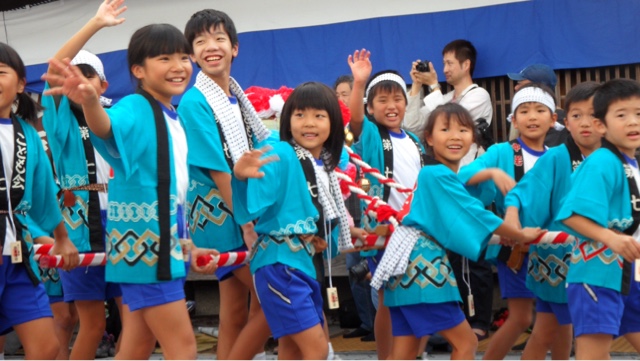 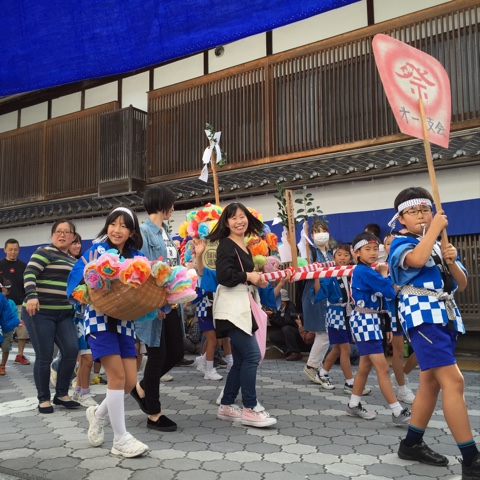 There were also Chinese lions.  It is considered good luck to get a ‘lion bite’. Usually this honour is bestowed upon children, but as guests of honour we all got a bite! 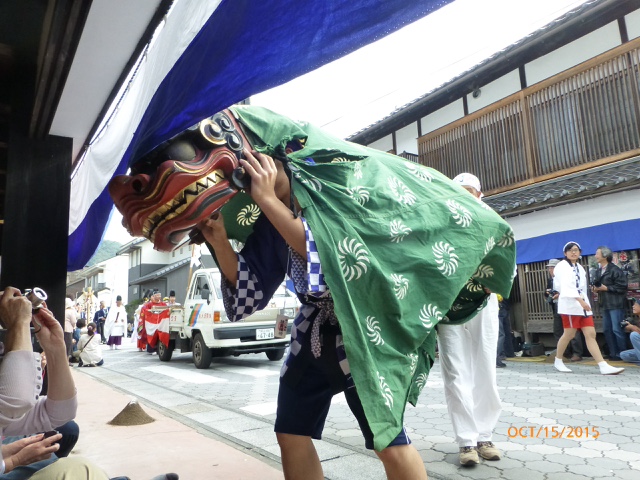 As for the kids – most of them were not impressed: 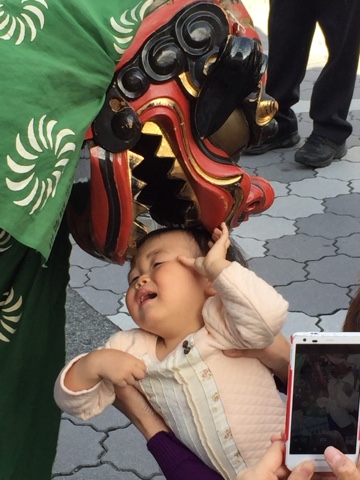 Although I’m not sure I blame them – the lion’s kind of scary!

One thought on “I love a parade!”