No, that’s not an auto-correct error. Yes, those are three words that don’t really belong together. And yet…

On our first full day in Istanbul we dove right in with a walking tour. Not just any tour – a culinary walking tour. This one was called ‘Backstreets of the Old City’ and began at the Spice Market. From 9:30 in the morning until 4:00 in the afternoon we walked around – and ate all the things!
Our guide’s name was Esim and she did a great job of showing us around. We has a couple from Australia and a fellow from England to round out our group. We began with a little shopping in around the Spice Market to acquire our breakfast, then we were off to a building that once was the coffee business centre. The building is still full of all kinds of businesses – we tucked in a table across from the tea kiosk and got to it. 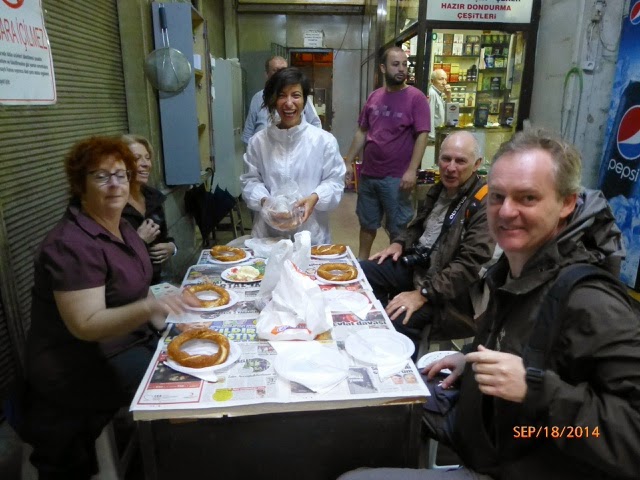 On the menu was simit (sort of like a bagel), several types of sheep and goat milk cheeses, olives and the nectar of the Gods. Yes, we discovered Kaymak – clotted cream made from water buffalo milk. It is on the list of the best things ever, especially served with honey. We had tea, of course. The word for breakfast in Turkish translates to ‘before coffee’. That’s because Turkish coffee is so fierce that you don’t want to have it on an empty stomach so tea and food happen, then the coffee. I can’t say that I liked it the way I like regular coffee, but it wasn’t bad. So, fed and coffeed we hit the streets.
We don’t have to get far from the bazaar to lose the tourist stuff and get into things for the locals – pots and pans, for intstance? 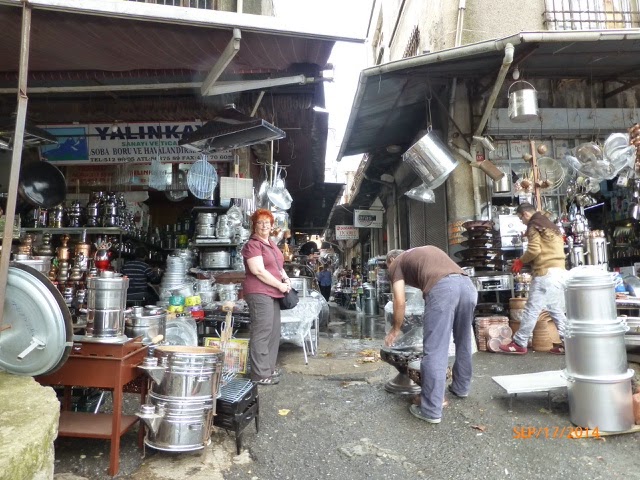 They’re not just selling them – they’re making them.
Next food stop was to try Kokorech, which seems to be a local hangover cure. Take a look: 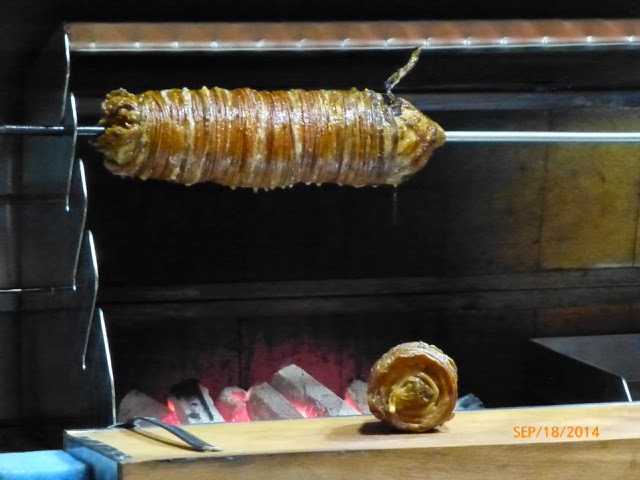 Appealing? Turns out to be sweetbreads, wrapped in sheep intestines, which are grilled over the fire. Pieces are then cut off, chopped up, mixed with tomatoes, green peppers, onions and lots of spices, the  sautéed and served on a bun. It was actually very tasty and if you didn’t know what the meat was you’d never know.
Our journey through the streets included tastes of a Turkish form of pastrami, an assortment of baklavas (including one made with the wonderful Kaymak), a visit to a candy shop for real Turkish delight (lokum) and halva. Each stop was at a different store or booth, where we met the owner and learned about the food. There were also many stops just to learn about foodstuffs.
And that brought us to the pudding shop. Turkish culture is really big on desserts. We haven’t seen much in the way of cakes and pies as we know them, but specialty stores for baklava, candy, pudding, ice creams – wow. The puddings are what you’d expect, though more pistachio and milk flavours and not as much chocolate. And yes, chicken breast pudding – wherein said chicken is puréed to a fine pulp and added to a basic pudding. It gives it a different, more robust texture, but no chicken flavour. Why? Because they can? I don’t know…. 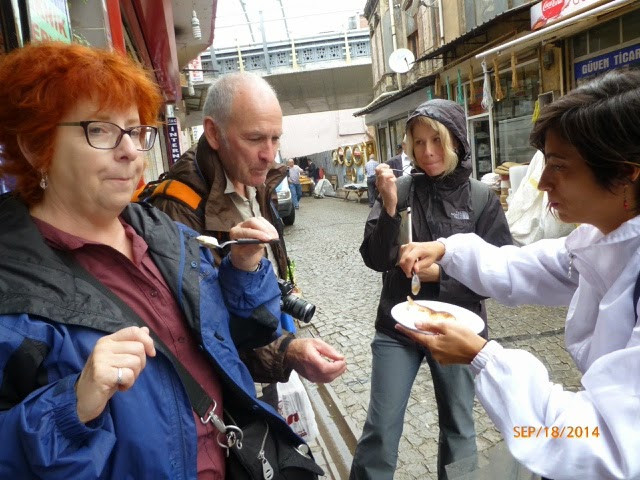 The look on my face is more ‘are you taking my picture again?’, not a comment on the pudding.
Another stop for a really spectacular layered donair – look at that beauty! 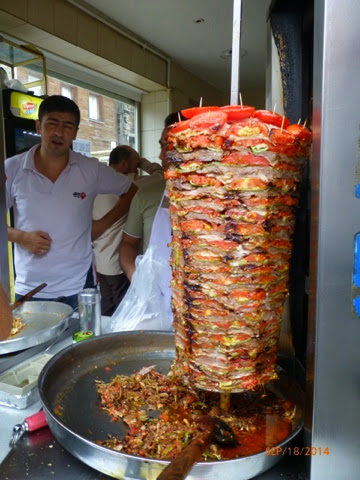 Slices of beef layered with tomato, onion, green pepper and spices then cooked on the spindle. So good.
Next stop was for a traditional drink called Boza. It is made from fermented millet, topped with roasted chickpeas and cinnamon. Thick like a milk shake – I think it qualifies as an acquired taste – opinion in the group was split on whether it was a good thing. 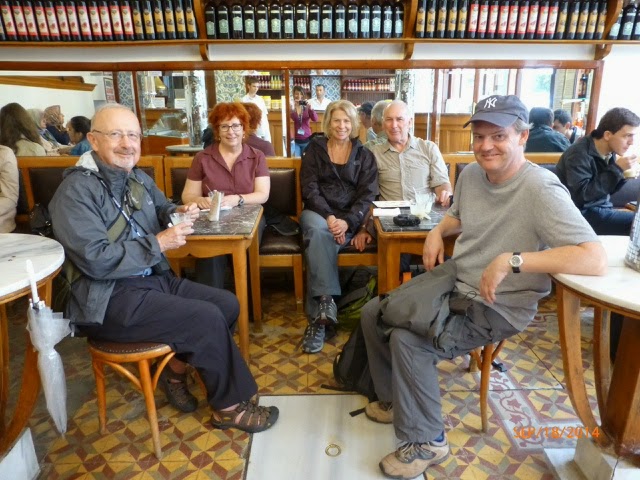 Drinking Boza with the locals – the store has been in the family for generations and is lovely. Looks sort of like a high class saloon. For milkshakes.

In addition to all the eating we visited mosques and talked and learned a lot about Turkish culture. And then it was time for lunch!
Lunch was pit roasted lamb, chicken and rice pilaf, two salads – and ayran. Another drink with mixed reviews. It is made from yoghurt, water and salt and has air blown through it so the top is all bubbly. Some folks were ‘OMG its so salty’, others were ‘OMG its so sour’ and some were ‘Yum!’  The lunch was delicious and concluded with a sort of cake stuffed with Kaymak, but man we were picking at our food by this time. We had started with breakfast at about 10:00, and been walking and eating until 2:00, when we tackled lunch. We staggered back to the hotel for a nap and that was the day done. 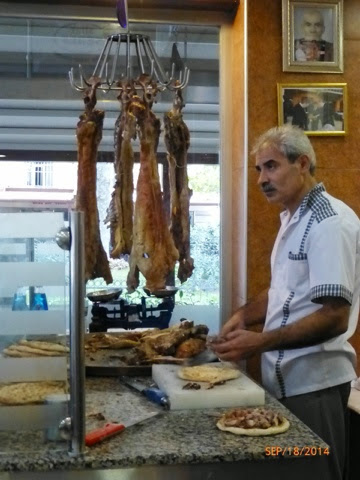 Lamb from the pit.
Urp.