And so the great adventure, Autumn 2914 version, begins. We are in Istanbul – we were last here in 1999. It was pretty straightforward to travel from Victoria – Victoria to Toronto direct (~4 hours) followed by Toronto to Istanbul direct (~9 hrs). Long flight, but not complicated.

Because we arrived at 9:30 am I figured that we’d be too early to check in to our hotel – and we’d be tired. So maybe a visit to a Hamam would be in order. One thing and another, we found a Hamam that met our requirements and made a reservation.
Most hamami are segregated – there are either seperate facilities, different times of the day or different days of the week. Which is fine, but the first places we found would have had me going in the morning while Wilf did??? And then Wilf off in the afternoon leaving me unattended. But we found a place – for tourists- that is co-ed.
After a visit to the Hagia Sofia (in the 15 years since our last visit they’ve moved the scaffolding from one side to the another) we found ourselves at the Hamam, tired, disheveled and hours early for our appointment. No matter – they swept us in and got us settled.
As is traditional men get a large towel wrap to wear in the bath. To preserve modesty women are given a pair of shorts and a bikini top in addition to the wrap. A pair of wooden clogs completes the ensemble and off we went.
The main room is a large domed area with a huge marble platform in the centre – 8 people can lay out easily. The platform is heated – as is the floor – and we layed down to relax in the heat. Around the outside of the room are big marble sinks and small basins. We could go and pour water over ourselves – mostly to cool off. After awhile we were called into a smaller room where there were two marble massage tables and two muscular guys. First up we sat down by the big sinks for a rinse and then a scrub. Sort of like being worked over with a potscrubber.
Once we were scrubbed there was the small problem of hauling my weary slippery self up off the floor, but big guy helped me get the job done. I’d forgotten about the Ottoman sitting on the floor thing…
Next up was the soap bubbles – the masseur had what looked like a big pillowcase in a pail of soapy water – the case would be full of air and bubbles – it was a strange sensation as the hot bubbles poured over me – by the time he was done I was covered from my neck to my feet in a layer of bubbles about 4″ thick.
After the bubble bath and a rinse – a massage. That worked out the kinks! In a more traditional set up there would have been a very thorough scrubbing to take off a couple of layers of skin followed by a massage that takes you apart and then puts you back together. None of this was quite as rigorous but it was just the ticket.
After it all we changed out of our wet things and into a dry towel. The attendants then used more towels and lots of flapping and wrapping to get us all bundled up – we sort if looked like gift wrapped packages by the time we got to the lounge area to enjoy fresh and delicious orange juice. 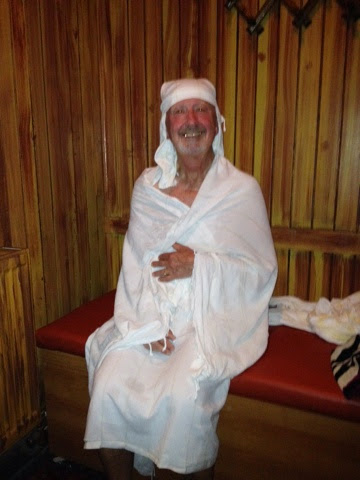