So – here we are in the desert – and its raining! Go figure! In fact it has finally cooled down enough at night that the cruise director decided to have our first night time deck party. And then it rains….

We didn’t join any shore excursions in Fujairah. The ship had a shuttle organized to a local mall, so we went along hoping for wi-fi. Sure enough, a Starbucks obliged and we had a chance to check in with the world. Not much to take pictures of – we kind of treated it as another at sea day. In fact we actually spent the afternoon on the pool deck and went for a swim. Usually it is so hot up there that I risk spontaneous combustion if I set foot on the deck.

Abu Dhabi was also rainy and overcast. And this really isn’t a bad thing – it kept us from being just slayed by the sun. Again we decided against any shore excursions, and again a shuttle was laid on for a local shopping centre. While both Muscat and Oman were very low key cities, Abu Dhabi is hugely developed and full of skyscrapers. We went to the Marina Mall, which is huge. And being a Saturday it was packed – locals, expats, tourist. A blizzard of shopping. And of coffee drinking – because it was so chilly outside!

From the mall we could see the very big and very famous Emirates Palace Hotel – we thought we’d walk over for a look see. After about a 45 minute walk around the perimeter we approached the gate, only to be told that long pants were required – for Wilf. So, back to the mall we went.

And still everyone is saying – pffff. Wait til you see Dubai! 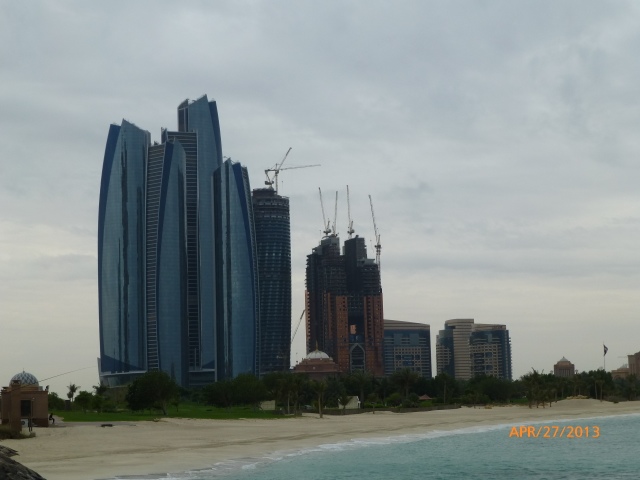 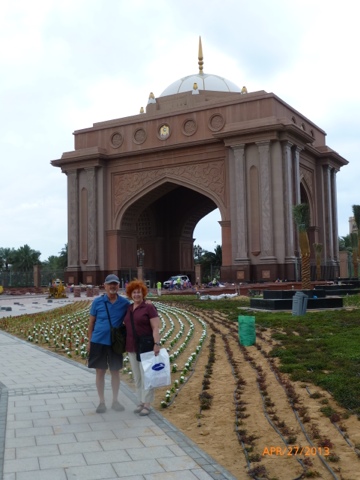