When a Japanese bath meets a natural hot spring you have an onsen. And on an island with as much geothermal energy as Japan has – you’ve got lots of onsens.

Wilf decided we should really get the onsen experience, so he booked us two nights at the Sanga Ryokan at Kurokawa. This a little town in the back of beyond that has about 24 hot spring spas wedged into a little valley – it is a resort dedicated to bathing. When Wilf was making our bookings he didn’t realize that we would be there on a weekend at the height of leaf viewing season.

Our ryokan (inn) was beautiful, nestled by the river a few kilometres from town. Our room was huge and welcome tea and a sweet bun were waiting for us. Also waiting were the yukata, hapi coat and tabi socks that are the usual resort wear. We had already left our shoes at the front and picked up indoor slippers. Everyone else was dressed the same, and we wore our yukatas for our meals, as well.

One of the things about Kurakowa is that besides enjoying the baths at your own resort the idea is to trail off and sample some of the other places in town. We were assured that we just sail off in our little outfits – everyone else does. After breakfast on Saturday we got a ride in the shuttle over to another out of town ryokan and started our day. By the time we got to town it was a busy Saturday – lots of day trippers all around. But if there were any fellow ryokan folks they had changed back into their civilian clothes. Because we were the only people in ‘traditional’ Japanese clothing. We were also the only Westerners in town. I mean that quite literally. Now we were never going to pass un-noticed. But we were pretty high on the dork-o-meter that day, I think. Yep. Sharon and Wilf – amusing the locals since 2012.

But – let me say. The town was beautiful and the baths were lovely. As day visitors we could use the outside and some of the inside baths at each inn we visited. The outside baths tend to feature stunning views and beautiful foliage while the inside ones concentrated more on interesting architecture.

The etiquette around bathing shifts a bit, too. From the dressing room we would usually go right outside. Instead of a row of taps there would be a stone basin with hot water running into it and small basins or buckets to scoop water with. We’d throw several buckets of hot water over ourselves with a bit of extra attention to private parts and feet. Then, into the pool!! This usually happened pretty quick, what with it being November and all. The pool isn’t crystal clear like an indoor pool – the water is heavily mineralized and leaves fall in. Did I mention that the water temperature was usually between 40 and 45 degrees C?

At the first place we went to I was sorted of adopted by a group of young women who saw me wandering around a bit – unable to read the signs and so a little confused. After a soak in the big outdoor pool they called me to come with them. Off we went down a boardwalk through then woods (each carrying a wee hand towel and that’s it) til we came to a building with two more baths in it. Quick splash and in we went. It was super hot, which led to cries all around of ‘atsui, atsui’ (hot,hot) . In this building the windows slid back, framing a perfect view of a waterfall, surrounded by Japanese maples. Really lovely.

After each bath Wilf and I would meet up, stroll around a bit, look at the shops, have a drink. After we had don town we returned to our ryokan. As guests of the inn we could reserve a private bath. Also called family baths, these baths are not segregated – you can have whoever you wish with you. We went each night around nine. It was really nice, but the 40 degree water temp and the 10 degree air temp ment that there was a lot of Goldilocks going on – too hot, too cold.

So, I’ll leave you with some pictures – Wilf took the camera into a few of the men’s outdoor baths (shhhh don’t tell). And you can decide how dorky we looked! 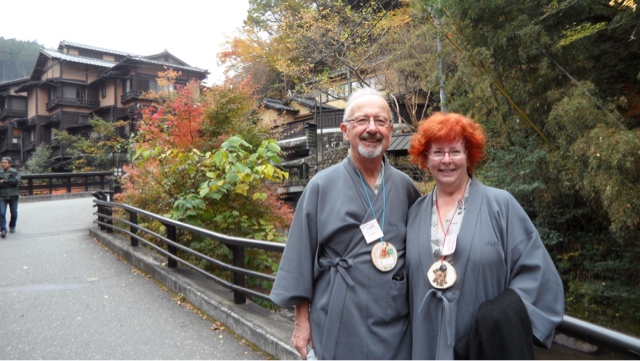 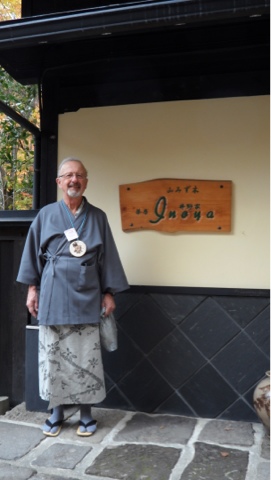 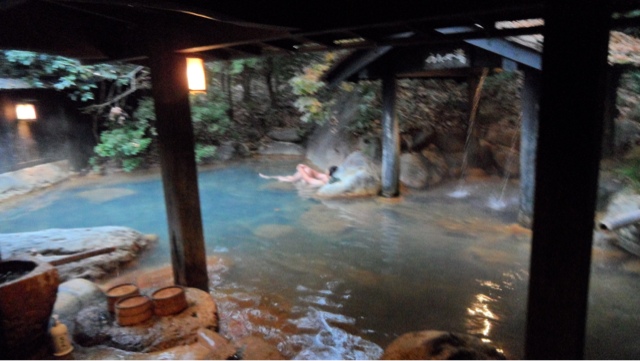 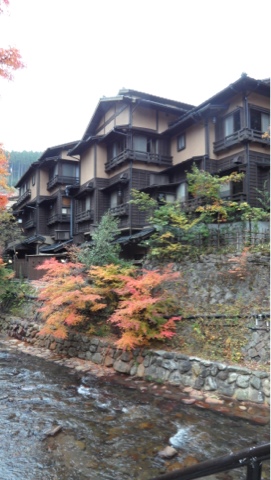 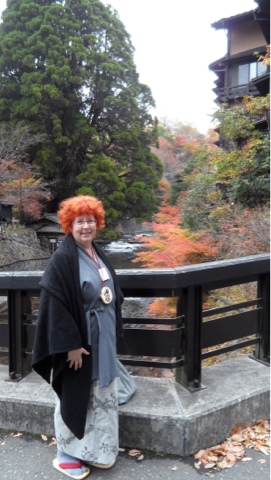 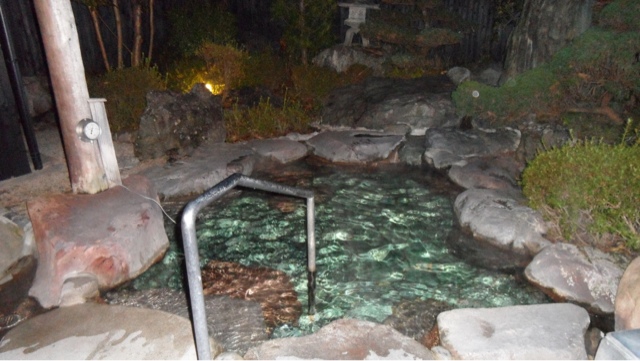 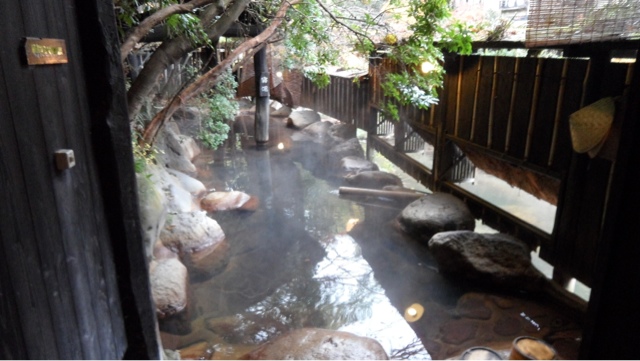 One thought on “At an Onsen”