I, for some reason, am interested in container ports. I like the look – the repeating patterns of the stacks of containers, the lines made by the cranes, the colours, all of it. Usually container ports are busy but quiet, things happening without commotion but with intention as trucks come in and out, containers are loaded and unloaded and everything happens as it should. When we opened the curtains in Zanzibar, however we hardly knew what we were seeing. Chaos. Confusion. Mess. People. Shouting. But we had a tour to take so off we went. When we returned, slayed by the heat, we went up to have lunch. We found a table by the window and tried to sort out what was going on.

We’re on deck 9, looking over the container port itself at what appears to be a ferry landing. I won’t call it a terminal because as you can see the people, the many hundreds of people, are wading into the water to board the boats. The tide is falling, so they are wading further and further out and the moored vessels are leaning more and more. In the second picture you can see that a boat appears to be on fire. At first we were a bit excited, but no on out there seemed concerned. At least there was no running around. A Viking funeral? The old ‘you owe me money and I’m going to burn your boat down’ story? Eventually we could see that the flames were moving around the bottom of the boat from front to back. After the second and third of this (the further the tide went out the more flaming boats happened) we decided they were sealing the outside of the boat with tar and after the flames went out they would go in and smooth the now liquid tar out on the boat hull. That would also explain the prevailing smell and haze. Having sorted that we returned to our cabin to consider the scene night in front of us.

In this part of the port the containers are arranged in streets and a being emptied right there. The active containers are the second level – the easier to drop things down to the waiting truck. The guys emptying the container of drywall board were at it all day (36C), loading little trucks with frightening quantities of board. When a truck would pull away guys would hustle broken and damaged pieces of wall board into one of the ground level containers. Further back (truck with bright yellow containers in the back) they were unloading big plastic containers of cooking oil, which they would drop from the second story onto a pad on the truck bed. Which meant that some bounced right out of the truck, some rattled around the truck bed. The truck bed was slick with oil so there had been some breakage. It was amazing that no one got hurt by a flying container. Across the ‘street’ an entire container of ‘ Super Mama’ laundry detergent was being loaded bag by bag into a series of waiting trucks. And closest to us was a container that appeared to be huge bundles of second hand clothes. Some were addressed to people, some had a series of codes. Some had oops ‘broken’ open and the unloaders were pulling things out and putting them in their own bags. You can get a lot of bundles of clothes in a shipping container.

The other parts of the port seemed to be more like a regular container port with trucks in and out and cranes moving round stacks of boxes. Not everything was arriving by container ship : 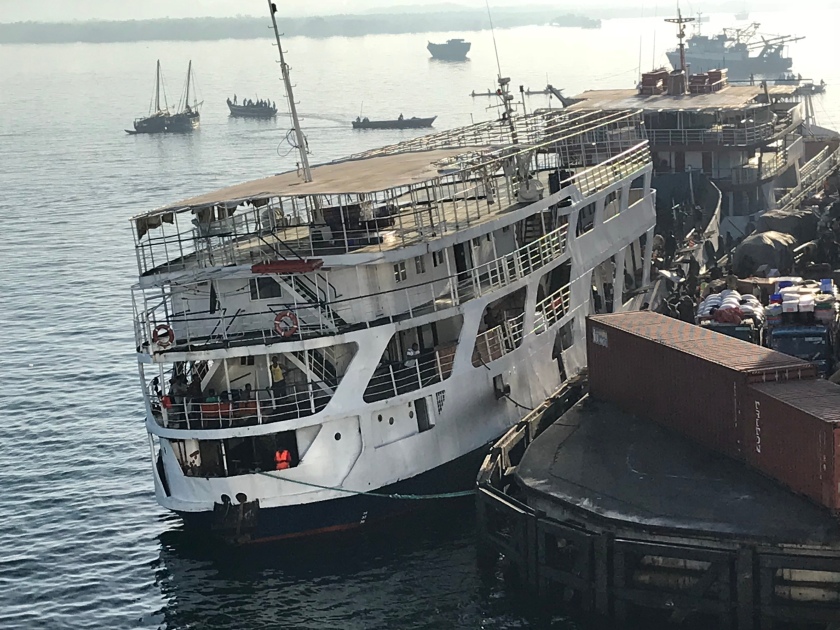 No one seemed terribly fussed by the lean on this boat as they were off loading it.

It was really hot: 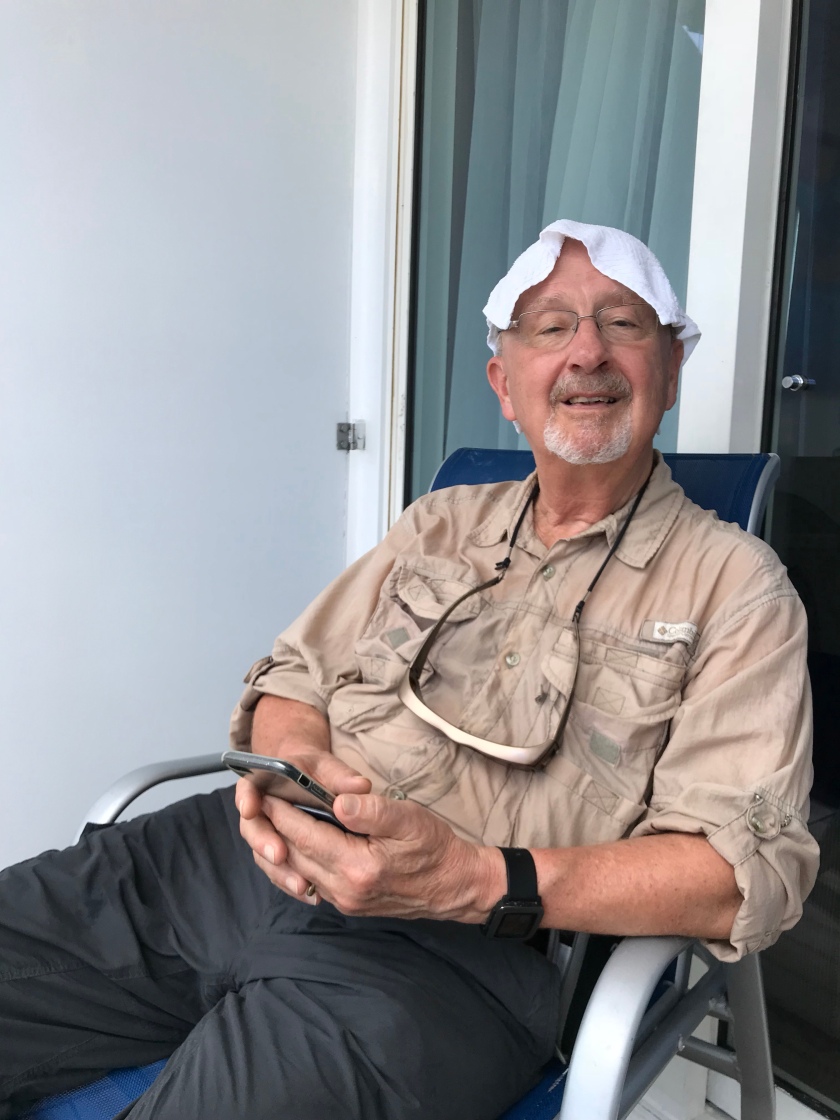 It took a long time and a quantity of beer before we could even rouse ourselves to get out of our touring clothes (long pants, long sleeves to keep the sun and bugs off and to respect the local sensibilities) It was a very entertaining afternoon and someday when I have enough bandwidth I’ll post a little video so you can see and hear what it was like.