We have enjoyed the benefits of Japan’s geothermal blessings on our trips there. And now we’re in Iceland, where they also know how to harness those powers as well.

Flights from North America tend arrive between 5:00 and 7:00 in the morning, which means a traveler is likely  to have a long wait before being able to check into their hotel. A little investigation showed that the bus from the international airport to Reykjavik conveniently makes a stop at the Blue Lagoon – perfect!
The people of Iceland harness the volcano heated water beneath their island to produce electricity and hot water to heat their buildings. The water that comes from the earth is heavily mineralized, so rather than use it directly they use the super heated water to heat clean lake water, which then spins turbines or is piped to where it is needed. The mineralized water is then re-injected into the ground to complete the cycle.
Some of that hot mineralized water went into a small lake before being re-injected and soon enough people were coming for a swim. And soon after that someone thought ‘Hmmm’. And voila, the Blue Lagoon complex was born.
The water really is an amazing milky blue. The silica dissolved in the water precipitates out making a white rim around the lava edges – it feels slick like porcelain. Easier to sit on than the lava. A huge lagoon has been carved out of the lava, with little bays to explore. It’s not terribly deep – mostly we walked in the water at about chest depth with some swimming.
When we arrived it was 08:00, drizzling lightly with some very ominous skies. 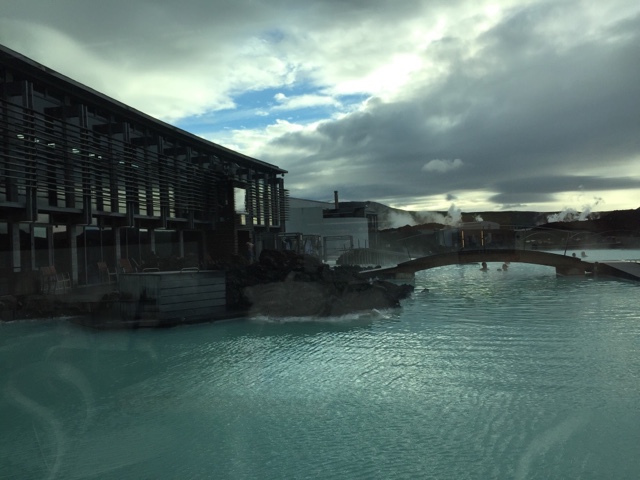 In this picture (taken through the window)!you can see the geothermal plant (and steam) in the far distance with part of the swimming lagoon and change room area in the foreground.

We were there for several hours and got a tour of several seasons – light rain, wind strong enough to raise whitecaps, brilliant sunshine, rainbows- no snow, though. Price of admission included a drink at the swim up bar, so by 9:30 we had beer and cider and were lounging in the shallows out of the wind. The life guards were bundled up in parkas and woollies as they watched over us!
We took the opportunity to have an in water massage. In a separate little cove we reclined on what looked like a floating yoga mat. Once aboard we were covered with a blanket and for 30 minutes we floated in the lovely water and had the kinks of a 7 hour plane ride dealt with.
Before taking the bus on to Reykjavik we had a sumptuous lunch in the restaurant called Lava. Smoked Arctic char and incredible rack of lamb. Wilf took this picture of me as dessert arrived – jet lagged, waterlogged, dishevelled and happy! 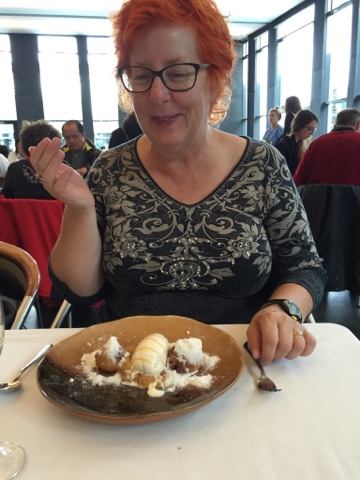 One thought on “Another bathing experience”