This is our third trip to Japan.  Previously we have traveled here independently, but this time we are beginning our trip as part of a group. Our town of Sidney has a sister city in Niimi, Japan and some years back a group from Sidney came for a visit. They realized that there needs to be an official visit that included the Mayor of Sidney to really cement the relationship between the two cities. It has taken a lot of time and arranging but the trip has finally been organized. We are a delegation of eight and after just two days we are filled with the sights and sounds of this city of 33,000.

Our first morning began with a visit to Niimi city hall. We were greeted with the staff ranked outside in two lines, waving Canadian and Japanese flags under a huge ‘Welcome to Niimi’ banner. Once inside we passed many more bowing staff members as we were escorted to the Mayor’s office. Two translators, still photographer, video photographer, a master of ceremonies, the eight of us, the Mayors, deputy mayor, various department heads, representatives from the Niimi International Exchange Association – it was quite a process to get everyone settled before greetings and speeches could begin.
While this was the first official delegation to Niimi, official delegations from Niimi had been to Sidney, so there was much reminiscing about this visits. And then there was the official presentation of gifts: 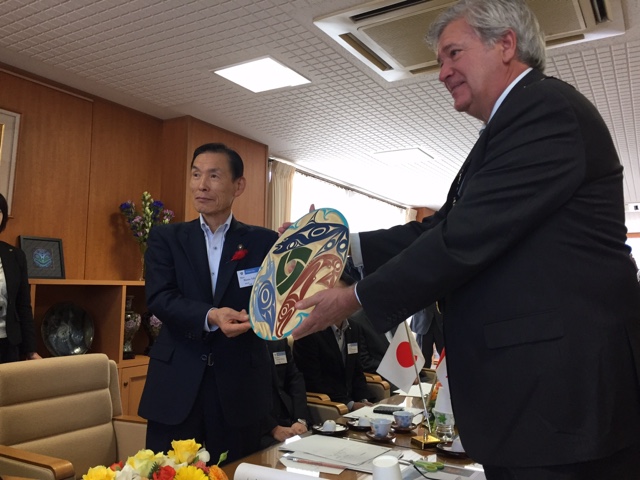 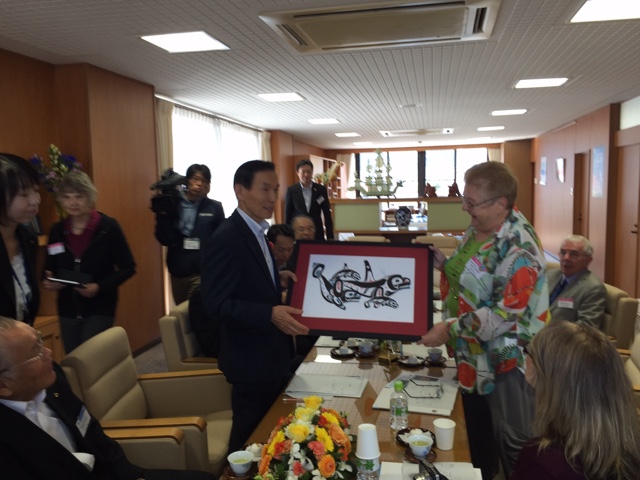 Lesley Nicholls, president of SSCA, presents a print to Mayor Ishigaki. After a drink tea and a sweet (decorated with maple leaves) we were on our way for a day of adventures.

In the evening we were treated to a welcome banquet where we met again with the mayor and his officials, along with other representatives of the international committee, professors from the local college and the department of education, and four Canadian assistant language teachers working in Niimi. More speeches, more gifts, sushi, local food specialties, lots of beer and socializing. There were forty guests in total, which meant a lot of socializing!
We also had a performance by a traditional music group that included dancers who portrayed characters from Japanese history. 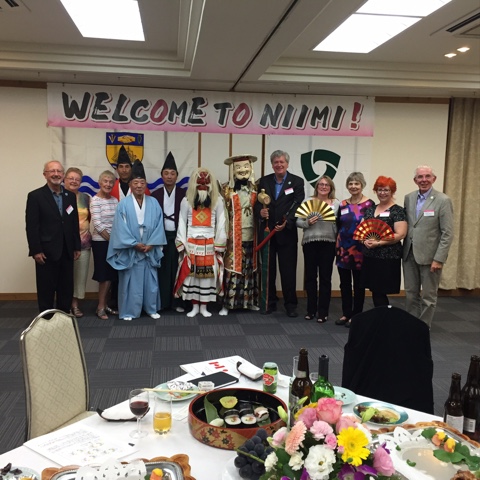 Our delegation with the performers.
Our hosts were sympathetic to the fact that we have all been traveling and are a bit jet lagged so the festivities wrapped up early. After such an exciting and interesting day I must admit I found it difficult to let it all go and sleep. But another day awaits!

2 thoughts on “We’re officially in Japan.”