After several days in the southern part of Kyushu island we headed a little further north. Mt Aso sits in an enormous caldera about 60 minutes from Kumamoto. We took the Trans Kyushu Limited Express to get there, which turned out to be a special train. It is only two cars long, kind of vintage in style and it goes along a fantastically scenic route.

Early this year there were terrific rainstorms in this area with a lot of road and rail damage and we could see evidence of that as we went along. In order to climb up and into the caldera the train took a series of switchbacks, so we’d go forward, then backward, then forward to climb up.

The train dropped us at Aso Station, where we checked our luggage and caught a bus to take us up the mountain. It was a twisty turny trip made all the more so by the number of road washouts from earlier this year that reduced the traffic to alternating one way.

We could see the gas cloud rising from the mountain top and there was a definite smell to the air, even down at the town. Once off the bus we walked through the gift shop only to discovered that the cable car to the top was not operating due to dangerous gas levels. Well. What a disappointment. We were looking around the shop about ten minutes later when we heard a rumble and excited voices – it’s open! Everyone ran upstairs, bought a ticket and crammed onto the cable car for the short ride up.

And what a sight! It was fantastic. Below us was a boiling aquamarine lake with plumes of gases rising up. The walls of the caldera are streaked with minerals that have precipitated out from the plume. All the tourists were running around taking pictures as quickly as possible. Souvenir venders were selling big chunks of sulphur and there were technicians in gas masks taking air samples.

After about 15 minutes a voice came on the loudspeaker and everyone started back down toward the cable car building. Even without speaking Japanese it was pretty clear that the message was ‘get out of here now’. The people on bus tours got back on their buses and many people got back on the cable car. But some of us remained and walked to another lookout for views out across the main caldera – it is the biggest caldera in the world, some 28 miles across, with the new active volcano off to one side. Eventually the loudspeaker started up again and the wardens started blowing their whistles – time for everyone to go. We were very happy to have been able to go up and see it all. Sometimes the wind direction closes the peak for days and today when we passed back through Aso it was foggy and rainy and we met people who had been up and seen nothing. It was all my little geologist could have dreamed of. 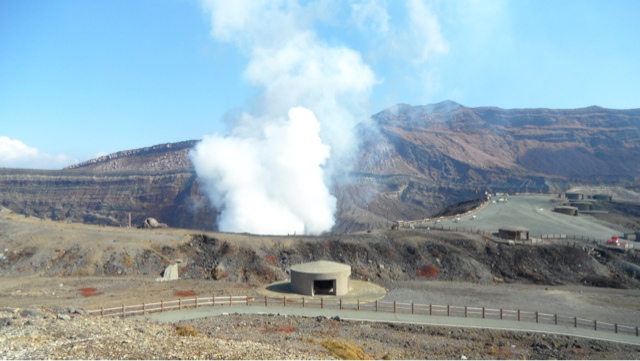 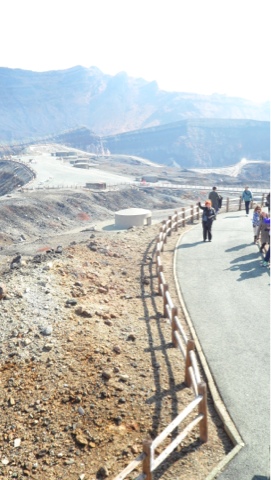 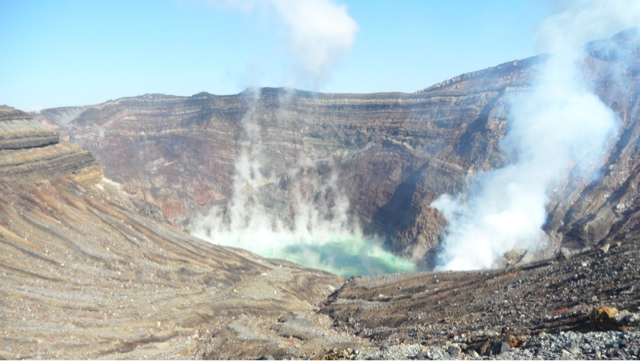 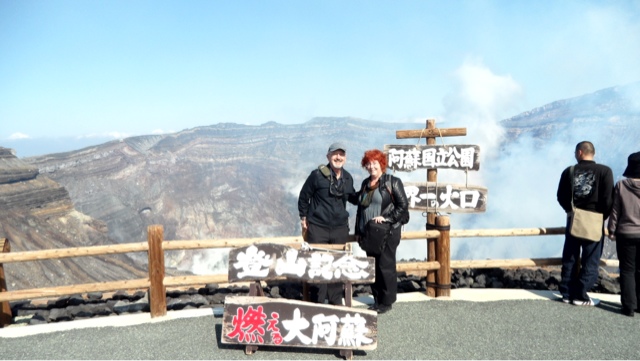 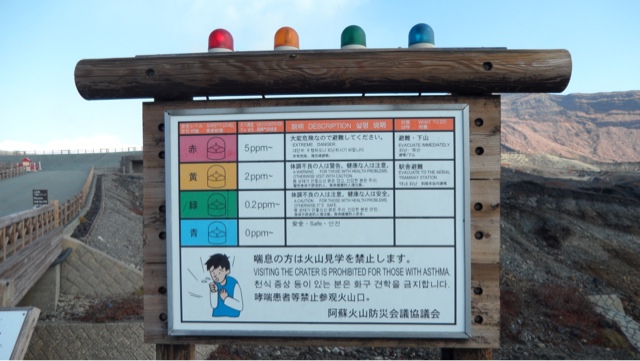